How to use PCIe in low-power SoCs by swapping the standard PCIe PHY for M-PCIe, defined by MIPI for mobile use

Since PCI Express was launched in 2002 as a replacement for PCI, PCI-X and AGP, it has become the interconnect standard of choice within enterprise and high-performance computing applications.

This popularity has lead to incursions into other markets, such as the digital home/office, and laterally, wireless and mobile multimedia. Each market makes different demands of the standard: pure performance for the enterprise equipment; cost and integration for the digital home/office space; and power efficiency for mobile applications.

Efforts to reduce the power used by the PCI, and lately PCIe, interfaces can be traced back to 1997 with the introduction of the PM 1.0 (power management) specification, addressing the power consumption of idle devices.

The introduction of PCIe 1.0 in 2002 brought with it a definition of Link power states (Ln) and active state power management (ASPM).

In 2009, dynamic power allocation (DPA) followed, defining ways to manage the power envelopes for active devices. This was followed in 2012 with L1 sub-states (L1 SS), which defined ways to shut off sub-blocks of the PHY to save energy.

Despite these efforts, the mobile market, which is currently using PCIe 2.0 at data rates of up to 5Gtransfer/s, wants further power reductions. There are two main issues to overcome to achieve this: the power consumed by the PHY specified by the PCIe standard is too high; and its latency when moving in and out of low-power states is too high for use in highly responsive mobile devices.

A collaboration between the PCI-SIG and the MIPI Alliance has brought a solution: using the mobile PHY (M-PHY) already defined by MIPI to provide the physical interface for PCIe when used in mobile settings. The result is known as M-PCIe.

M-PCIe preserves the higher (transaction and data link) layers of the PCI specification and the PCIe programming model, but replaces the PCIe PHY with the M-PHY. This means changing a number of parts of the overall PCIe channel. Within the PCIe SoC, the PCIe lower physical layer (LPL) has to be replaced with the equivalent M-PCIe LPL. The link from the lower physical layer to the PHY, normally implemented using the PIPE specification, has to be exchanged for the RMMI approach specified by MIPI. 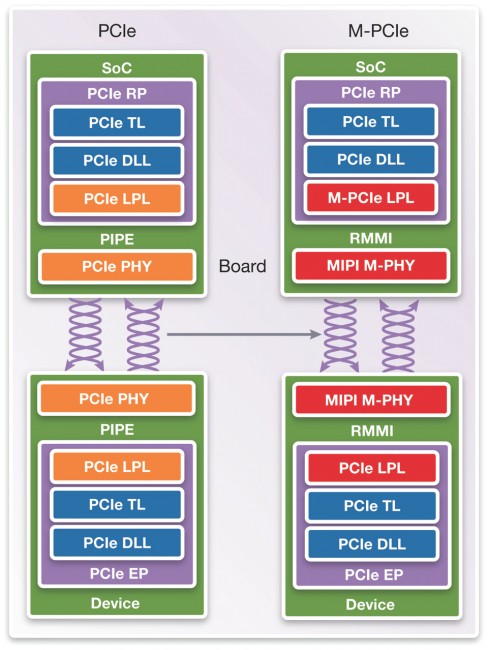 Comparing PCIe PHY and the M-PHY, the M-PHY offers a number of advantages to mobile designers:

Swapping from the PCIe PHY to the M-PHY isn’t without challenges. For example, using the M-PHY means using a new link-training and status state machine (LTSSM), to control the M-PHY’s low-power status. Implementing the LTSSM will require a lot of validation.

The change in the link to the PHY, from using the PIPE specified for PCIe PHYs to using RMMI (the reference M-PHY module interface), also presents design challenges. RMMI introduces an elastic buffer on the MAC side (controller), which makes comparing latencies between the two approaches more difficult. Because it was not originally developed for PCI Express use, the RMMI interface also lacks specifications for other attributes, such as the Tx symbol clock rate, which may make interoperability between controllers and PHYs more difficult.

Synopsys offers a DesignWare implementation of M-PCIe, built on its DesignWare PCIe offering, in a number of variants. The controller architecture has been adapted slightly so that users can opt to support either (or both)  PCIe PHY and M-PHY approaches from the same controller. 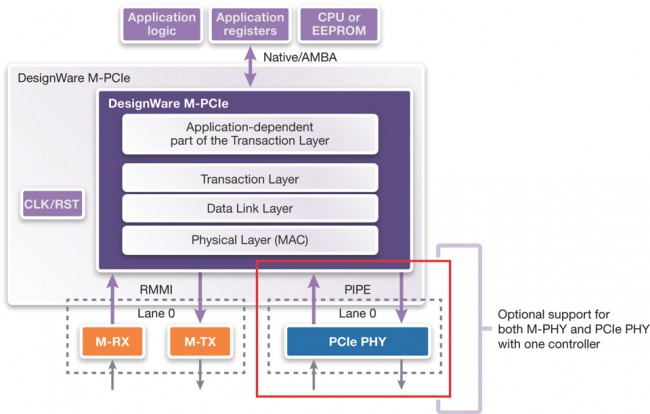 Figure 2 It’s possible to support both the PCIe PHY and M-PHY with one DesignWare controller (Source: Synopsys)

The block maintains the silicon-proven features of the PCIe PHY version, and the application interfaces. The power management is compliant with the PCIe PCI-PM and ASPM specifications.

On the software side, the block is compatible with existing PCIe programming models, and uses the same registers for configuration/port logic. Additional registers are provided to control the attributes of the M-PHY. This approach should make it easier to migrate designs from PCIe to M-PCIe with minimal changes.

Established physical layer verification IP packages focus so much on protocols they miss problems that arise from the broader context. A PHY verification kit bridges the gap.