‘Envelope tracking’ is not a new technique; it has been known about for more than 50 years. But it could greatly help the power consumption challenges once more facing mobile handset design.

RF signals using orthogonal frequency-division multiplexing (OFDM) modulation in standards such as LTE achieve high spectral efficiency by using the amplitude of the transmitted signal to encode information. But this typically comes at the price of reduced energy efficiency in the RF PA. 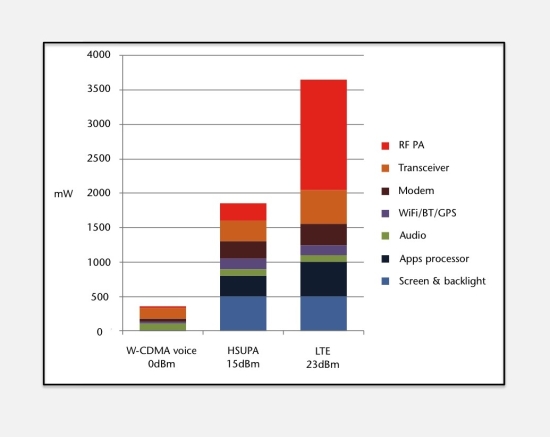 LTE signals have a much higher peak-to-average-power ratio (PAPR), so the RF PAs spend less time in ‘efficient’ saturated mode, and the energy they use in transmission increases dramatically.

There are a number of techniques that can partially address this challenge, such as digital pre-distortion (DPD), linearization and Doherty. However, none fully compensates for the efficiency lost due to the higher PAPR. They carry a relatively high design overhead, and some, like Doherty, are inherently narrowband, unable to span more than a single band.

It is time to take a fresh look at the design of the RF transmission amplifier chain.

The problem of high crest factors

RF PAs in handsets typically have classic Class AB configurations, and are at their most efficient when the RF envelope waveform is close to peak power.

This is not usually a problem with traditional signals, like 2G GSM, where the amplitude is constant. So the PA operates in this high efficiency mode all the time. However, when amplifying amplitude-modulated RF signals with high crest factors, like LTE, it is less efficient – typically in the range of 15-25%. 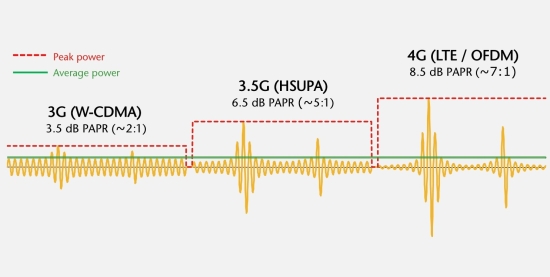 Digital Terrestrial TV broadcasters also transmit very high power RF signals, often in the range of 5-10 kW from a single site.  For high crest factor OFDM signals such as DVB-T and ISDB-T, today’s amplifiers offer only around 25% system efficiency.  A 10 kW transmitter consumes 40 kW of electricity 24 hours/day, resulting in an annual energy bill of around $40,000, and a substantial carbon footprint. 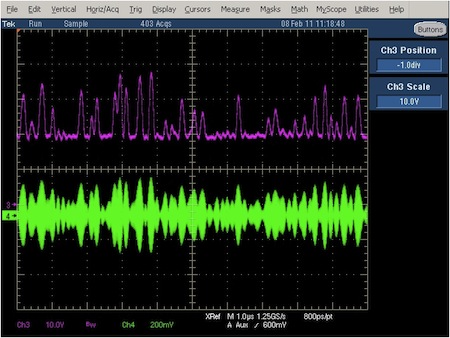 Figure 3. High crest factors in signals such as the DVB-T RF waveform (bottom) can be countered with an envelope tracking supply (top) (Source: Nujira)

‘Envelope tracking’ uses a completely different technique to enhance efficiency – and it does so over a wide frequency range and across multiple modulation modes.

The technique has been known about for half a century, but has not previously been implemented in a technically or commercially viable solution. However, as well as mobile communications, it is also now gaining traction in the broadcasting industry as it uses similar modulation schemes.

When used in broadcast applications, the total system efficiency is lifted from 25% to around 40%, leading to annual energy savings of around $15,000 for a 10 kW transmitter.

Instead of optimizing a final RF stage power transistor supplied by constant voltage, the supply voltage is changed dynamically, modulated in synchronization with the envelope of the transmitted RF signal. Doing this ensures that the output device stays in saturation – its most efficient operating region – for a large portion of time.

With a fixed supply voltage, there is a great deal of excess power over the required output waveform and this is dissipated as heat. Tracking the RF signal envelope closely with the supply voltage makes for a much lower differential, dramatically lowering the excess power.

The main implementation challenge for an envelope tracking modulator is bandwidth. To accurately track the signal amplitude without introducing distortion requires a power supply with bandwidth of 1.5-3.0x the channel bandwidth (i.e. 30-60MHz for a 20MHz OFDM channel).

The power supply modulator has to provide several watts of power, with extremely low noise and very high slew rates, all while itself achieving an energy conversion efficiency of around 80%.

Nujira has adopted and incorporated these features into its High Accuracy Tracking (HAT) architecture. 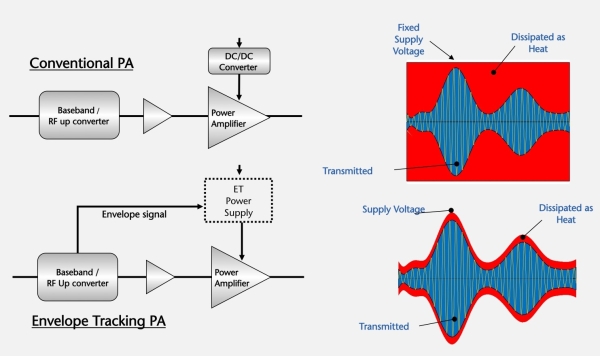 By developing the HAT architecture, Nujira aims to be the first vendor to successfully meet that challenge. HAT-based solutions offer an impressive improvement in efficiency.

Nujira’s high power Coolteq modules are now being used in many of the world’s higher efficiency TV transmitter and LTE base station.

Find out more about the demands of modelling RF PAs for envelope tracking here.