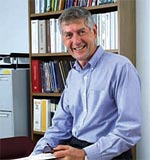 It is not unusual for analog circuit designers to exhibit a wistful air of ‘been there, done that’, even if you would never catch them wearing the t-shirt. That goes double for Lewis Counts, vice president of analog technology at Analog Devices and a fellow with the sector giant.

“There are things they’re doing at Crolles right now, that analog designers were doing in the days of Rubylith,” he observes of the cutting edge European research fab. “The digital community is facing hard issues in areas like process variability and device physics that have long been a part of analog design. Digital CMOS at 65nm is in a very similar position.”

It is Counts’ belief that we now live in a “supersilicon” era where semiconductor designers are already thinking and going beyond planar processes to deliver the functionality that the market demands, particularly with regards to how devices connect to the real world. And this process shows little sign of slowing down. “It’s been said hundreds of times, but the consumer doesn’t really care what we put inside the box – never has, never will. He buys the functionality. Sometimes he wants to use that functionality in ways that you didn’t originally anticipate and he wants more and more of it,” he says. “To meet those demands, we’ve had to go beyond planar technology. It’s served us well but now you see more and more silicon-on-insulator, you see silicon germanium becoming more popular and so on. So silicon has proved robust, incredibly so, but we can’t just look at it as the material for electronics in isolation.

“At the same time, you also have more integration through system-on-chip (SoC), but also, you have silicon-in-package (SiP) running alongside that. The need to deliver different forms of functionality within one product takes you into this area of 3D stacked die, and not just for things like memory.”

“The consumer doesn’t care what’s inside the box – never has, never will”

In a keynote at this year’s International Solid State Circuits Conference, Counts broke down the challenges facing the chip design world into five areas: dynamic range, bandwidth, absolutes (voltage, amps, seconds and Kelvin), power efficiency and complexity. He is, however, wary of trying to rank these challenges any further.

On one level, there is an overarching move towards reducing the supply voltage to 1V. Today this is arguably driving three trends: the implementation of analog on different processes (at the core of Counts’ view of a supersilicon era), the deployment of new architectures that preserve dynamic range in line with voltage scaling, and the drive to replace ‘analog’ circuitry with ‘digital’.

On another level, however, you can link these three trends and Counts’ five challenges into one strategic goal.

“When you look at all of this, what is a much broader requirement is that we move towards a more holistic approach to design,” he says. “It needs to be interdisciplinary and it needs to address all the main elements: system specification, design, process development, scaling, architecture and integration. We have to look deep into the applications and innovate in terms of architecture and circuit design in a unified way. And all the time, we need to stay very, very close to the process guys.”

However, what Counts does not see as an inevitable result of this is a trend to replace analog elements of an SoC or SiP on a whole scale with digital components. Even research groups that are now driving such substitution admit that digital-for-analog faces serious roadblocks, not the least of which is accuracy once the bit resolution gets into double figures.

“But,” adds Counts, “there are also instances where you may want to do more signal pre-processing in analog, particularly when you look at the increasing demand for high performance that is coming as you see the range of functions and capabilities on, say, a cellphone continue to grow.”

The complete replacement of analog by digital also faces a more fundamental obstacle in terms of good old-fashioned physics, a point Counts specifically addressed in his ISSCC address, with regard to inductors.

ADI’s chip for the Wiimote has taken MEMS mass market

“From a chip design and system perspective, inductors pose a significant barrier to integration and miniaturization – they take up space. Beginning with the wireless revolution in the 1980s, transistors have replaced inductors wherever possible. But the use of inductors will not go to zero, because of a simple factor: inductor-based oscillator circuits require less power than those based on transistors,” Counts said.

“That’s because the phase noise of an oscillator varies as the inverse square of the inductor’s Q, and furthermore, a ring oscillator may draw four hundred times more current than a simple LC oscillator for the same phase noise.” There are other ways of looking at this issue, particularly in terms of moving the digital components closer and closer to the antenna, as has been mooted.

“The problems you come up against are the energy that’s used for each conversion step and the thermal noise floor. If you aim for high dynamic range in digital, those factors are going to mean – and this is right there in the physics – that you are going to need a lot of power. For today’s devices, that isn’t going to work. We need to go the other way – less power.” Counts says.

Returning to his view of a holistic design world, Counts says that the issue is not one of analog vs. digital, but of making the right choice based on the circumstances and the application. “There will be instances where digital can and should take on more of the workload – that could be true for some cellular implementations. But there will be others where you will look more to analog,” he says. “It does come down to this need to get more integration in terms of our perspective as well as on the chip.”

Moreover, as a not-entirely-unrelated point, Counts notes that other technologies are now emerging from the analog domain that also could have much to contribute to the ongoing challenge. One of these is the long-overdue arrival of MEMS in mass-market consumer applications.

The poster child for that is ADI’s own three-axis accelerometer that underpins the innovative handset in Nintendo’s Wii gaming console (and which, although Counts would not say it, is a technology that has helped the Wii give a well-known rival with a much more widely-hyped piece of silicon something of a bloody nose).

“We’re obviously very excited about the Wii because it really has put our MEMS technology out there, front and center – although, again, the kids playing on these things almost certainly don’t care themselves about what’s inside the controller,” says Counts. “But there are other really interesting places we can now look to go with MEMS.”

Here, Counts once more cites the proliferating requirements that are accompanying the increasing pervasiveness of ever more sophisticated mobile devices.

“You can need half a dozen radios in a cellphone today, and it’s growing. You want to operate across all the bands, you want Bluetooth, you want WiFi, you may want FM and DAB and even TV. Then there’s WiMax, NFC [near field communication], UWB, RFID and so on. That’s a lot of noise, a huge design challenge in itself, but it’s also a lot of antennas,” he says.

“If you can say that there may be some times when only two or so sets of RF are live, you can see MEMS being used to provide some kind of adaptive antenna, in much the same way as people are looking at an adaptive software defined radio. I don’t think you can get to the point of a single antenna yet – there will always be cases where you need to keep more than one band open – but there are possible efficiencies there.”

“It’s amazing. I heard of an example where now you have fishing boats off the African coast and they will use handsets to ring ahead to all the ports near where they’re fishing to find which one is giving the best price. Applications like that were never imagined originally, but they show you how far the technology can go and how much it can do.”

However, he does have one amused perspective on how this power could be brought to the attention of some of the industry’s observers.

“What might be very interesting would be if we had an algorithm that could shut down every mobile device on one day just for one minute. Maybe that would explain more about what we do to Wall Street. You never know,” he jokes.

The RF and AMS specialist turned to design software that allowed it to run design checks during place and route.