Signal integrity (SI) issues have been around for a while, the result of ever-faster edge rates. Both SI and PI problems manifest themselves as data errors. Indeed, PI problems are often misdiagnosed as SI problems. As such, an understanding of power delivery issues is essential to the success of any board project, as is a willingness to deal with these issues early in the design flow.

Power integrity (PI) is an increasingly complex problem in higher-end electronic product designs. A few years ago, all ICs ran at 5V; single 5V and GND layers were all you needed to deliver sufficient, clean power to the components. ICs today run at multiple—and much lower—voltages, down to 0.9V.

Figure 1 shows a contemporary IC with multiple voltages and the complex power distribution networks (PDN) required to supply the voltages and grounds. Several factors contribute to increasing PCB design complexity for both CAD designers and engineers who analyze these PDNs. They include a growing number of different voltages; smaller voltage magnitudes (resulting in very tight tolerances); rising power demands from ICs; increasing operating frequencies; and ongoing pressure to control product cost (e.g., you can no longer afford to devote a PCB layer to every unique voltage and ground). 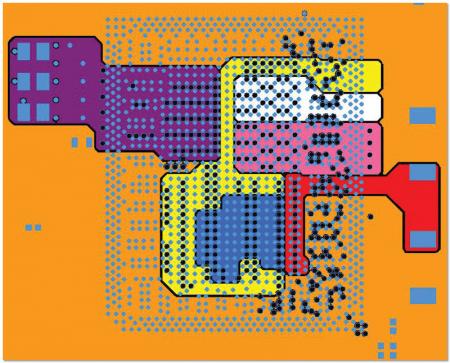 Figure 1
This IC requires six voltages, each fed by a separate PDN

Signal integrity (SI) issues have been around for a while, the result of ever-faster edge rates. Both SI and PI problems manifest themselves as data errors. Indeed, PI problems are often misdiagnosed as SI problems. As such, an understanding of power delivery issues is essential to the success of any board project, as is a willingness to deal with these issues early in the design flow.

The basic challenge for the CAD designer is to create PDNs that feed from the voltage regulator modules (VRMs) that supply all the ICs (with their various voltages or grounds) on the fewest number of PCB layers. The good news is that defining a PDN is a highly automated process in more advanced PCB layout systems, one example being Expedition Enterprise from Mentor Graphics. Simply outline the PDN shape and the software floods the area. The bad news is that these PDNs must typically be ‘jigsawed’ into the fewest number of layers. Designs can contain more than 30 PDNs, so a designer can face a very daunting situation.

Even after the PDN layout is complete, CAD designers must either perform PI analysis themselves or work closely with electronics engineers to ensure that sufficient, clean power is being delivered to all ICs. Corrections may require changes to PDNs and/or the placement of capacitors on the PCB.

From the electrical point of view, the goal in designing a PDN is simple to describe: minimize the impedance between power and ground for the appropriate frequency range. The successful execution of that goal is not so simple. Complexity is inevitable when there are multiple voltage rails and a limited number of planes available to carry those voltages, while the real estate available for capacitors on a PCB is shrinking all the time.

Another example is the inherent capacitance between planes on the board. The parasitic inductance of the planes is extremely low, making it an effective capacitor even at higher frequencies. Because the amount of capacitance between planes is typically limited by area and spacing, the plane capacitance does not equate to low impedance until you get to higher frequencies. As such, each of the board capacitances is inherently effective for a certain frequency range, and they must all work together to provide low impedance between power and ground across the design’s entire frequency range.

The inductance of a chip package limits the effectiveness of the board capacitances. It adds to the parasitics of the board capacitances, making them ineffective above roughly 1GHz. At this point, the on-chip capacitance (not limited by the inductance of the package) provides the low-impedance path between power and ground. As such, board decoupling is typically analyzed between 1MHz and 1GHz, and board PDN design focuses on minimizing the impedance between these frequencies.

where V is the rail voltage and Imax is the peak current draw of the IC. As such, ICs with higher current draw and lower operating voltages require lower PDN impedance.

Another benefit of low PDN impedance is the reduction of noise propagation throughout the board. Power pins, signal pins and vias can all introduce noise onto the planes, which propagates around the entire PCB and affects other circuits (Figure 2, p. 49). The presence of low-impedance paths between power and ground facilitates a better flow of return currents. Since noise is fundamentally unresolved return currents, the presence of these paths helps eliminate the noise issue. 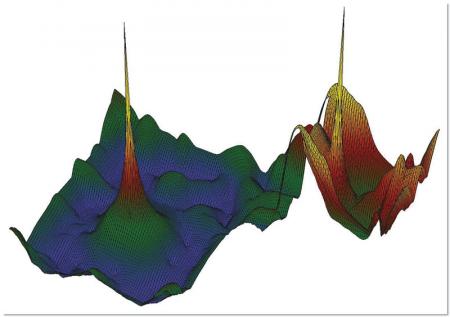 For DC, the problem becomes much simpler, but failures can be much more severe. The goal is still to minimize the impedance of the PDN, but the main concern is providing enough metal to distribute potentially tens-of-amps of current. With planes being divided up to accommodate the growing number of different voltages on a PCB, this can be difficult.

An analysis of plane shapes within a PDN can be very useful in identifying areas of low voltage (Figure 3, p. 49). Areas of the board where voltage drops below a certain threshold can lead to IC malfunctions, including SI problems and logic errors. 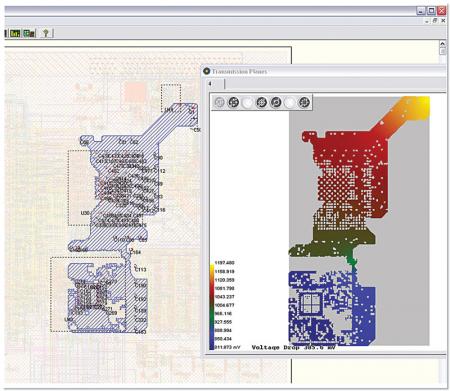 Figure 3
Plot of DC voltage from a power plane analysis

Areas of high current density on the PCB are an equal concern. They can be caused by neck-downs that are the result of partitioning the plane. But they are also common in dense connector and IC pinfields, where antipads eliminate a great deal of the copper on plane layers.

Analysis of the PDN at DC will produce this useful current density information, as shown in the plot in Figure 4. It is also important to monitor current through vias connecting planes together or connecting VRMs to planes. Vias can act as similar neck-downs and areas of high current density, leading to similar failures as those outlined above. 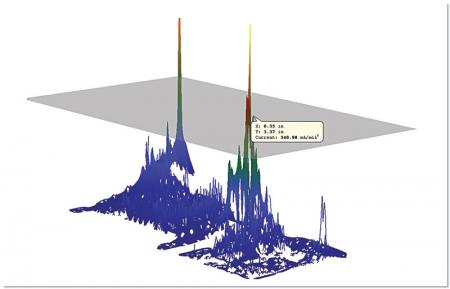 One Response to Designing a PCB for power integrity

Reliability is growing to match security as a key challenge for PCB design. These tools and techniques will help you rise to it.