John Swanson is senior marketing manager for DesignWare IP at Synopsys. He has been working in the IP business since 1990.

The data center market is expected to grow 20% a year until 2021, according to analysts Research and Markets, to $90.56bn, due to the increasing number of connected devices in use and their need for fast cloud-based data processing. This is creating pressure on the Ethernet interconnect standard widely used in data centers to evolve to move data more quickly and efficiently. This has driven the development of a 25Gbit/s version of Ethernet.

The 25G/50G Ethernet Consortium initially defined the 25G Ethernet standard and promoted it through its member companies. Based on the Consortium’s initial work, IEEE standards for 25G Ethernet are now defined for both single-lane and four-lane versions of 25G. Table 2 shows these standards and the related electrical specifications.

The existence of clearly defined standards has unlocked rapid development of supporting hardware. The standard supports various hardware interfaces such as chip-to-chip, chip-to-module and backplane. Running chip-to-chip and chip-to-module connections at 25G should improve data-center system performance, while the backplane version of Ethernet will help the blade server market to evolve from 1G though 10G to 25G interconnect. 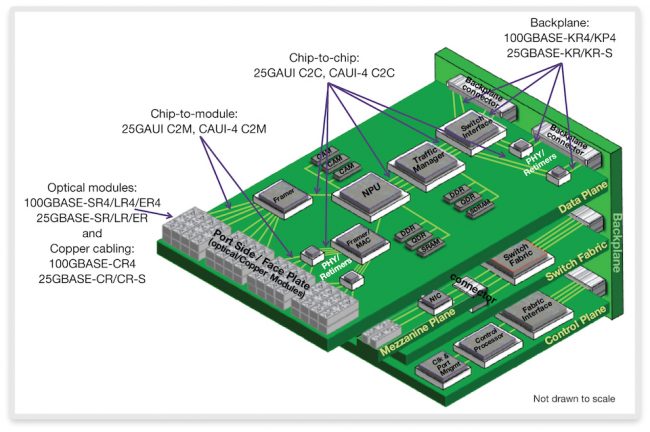 Achieving the system throughput of 25G Ethernet, while meeting its timing budget and supporting selected 25G Ethernet features, is complex. Designers who want to work with the standard but don’t want to design it for themselves need subsystem IP that includes the media access controller (MAC), physical coding sublayer (PCS), and serializer/deserializer (SerDes).

The DMA interface is included to ease the migration of 10G designs to 25G, as the first generation of mass-deployed 10G designs often use ARM’s AMBA on-chip interconnect. This is why the DesignWare Enterprise MAC’s optional AMBA AXI interface supports 128bit data transfers with up to 16 transmit and receive channels.

The MAC has a separate DMA channel in the transmit path for each queue in the MAC transaction layer (MTL). There are also single or multiple DMA channels for any number of queues in the MTL Receive path, and individual programmable burst sizes for Tx DMA and Rx DMA engines for optimal host bus utilization. Other options in the descriptor include:

The Enterprise MAC and PCS work with the DesignWare Multi-Protocol 25G PHY IP, which is optimized for signal integrity and jitter performance. It also supports Energy Efficient Ethernet strategies. The configurable transmitter and receiver equalizers enable users to control and optimize signal integrity and at-speed performance, and continuous calibration and adaptation features provide robust performance across voltage and frequency variations.

With Synopsys’ multi-protocol 25G PHY, all the components needed for a 25G Ethernet solution are available and fully tested. This means designers can take on tasks such as full subsystem simulations, synthesizing the subsystem with a variety of target process libraries, ensuring timing closure, and placement and routing. Synopsys also provides implementation and verification scripts to ease the configuration of the subsystem for the target application.

John A Swanson is senior marketing manager, DesignWare IP, Synopsys. He has been working in the IP business since 1990 when he joined Logic Automation/Modeling, which was later acquired by Synopsys. Swanson has worked in the design, verification, integration and implementation aspects of complex IP in engineering methodology, and business development and marketing. He has been working on system-on-a-chip technologies and methodologies for over ten years with Synopsys in a variety of assignments. Currently he is the product line manager for the DesignWare Ethernet family of Digital cores as well as JPEG, 1394 and the IP reuse tools.

Prior to joining Synopsys he worked for Amoco Oil Company designing wellhead automation and control systems. He is an Honor graduate from DeVry Institute of Technology where he completed his engineering degree with Presidents List honors.