An evolution of the Ethernet standard enable time-sensitive networking with the predictable latencies and guaranteed bandwidth necessary for automotive applications.

Advanced driver assistance systems (ADAS) such as lane keeping/departure warning, emergency braking, collision avoidance and, eventually, fully autonomous driving features, all demand predictable latency and guaranteed bandwidth in the network to ensure that safety-critical data can flow from sensors to processors and back quickly enough to be effective.

To meet this demand, Ethernet has become increasingly popular for automotive networking, and so the IEEE’s Working Group on Time Sensitive Networking (TSN) has released a set of TSN standards, and continues to define new specifications, to support real-time networking in vehicles. Automotive SoC developers need to understand the capabilities of Ethernet with TSN, as well as what it takes to implement the standard in an automotive context.

The evolution of time-sensitive networking

The evolution of TSN started with the introduction of Audio Video Bridging (AVB), which was meant to enable the use of Ethernet in audio video systems. As automotive designers began to look to using Ethernet in ADAS applications, their much stricter latency requirements could not be met with AVB alone. This led the IEEE TSN working groups to expand the AVB specifications to meet the requirements of using Ethernet for control applications with predictable latency and guaranteed bandwidth. The initial set of TSN standards is shown in Table 1. 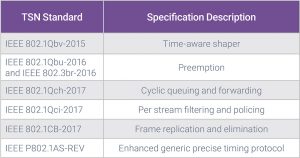 Automotive networks are designed to have predictable, guaranteed latency. A network with these characteristics is known as an engineered network. The time-aware shaper is used in an engineered network and enables scheduling to ensure that a critical traffic queue is not blocked. This is done with a ‘time gate’ that enables time-critical data to stream unimpeded while blocking non-time critical data, as shown in Figure 1. The IEEE 802.1Qbv scheduler’s logic determines the time intervals at which the gates must open and close. The time-aware shaper is implemented in the Ethernet MAC. 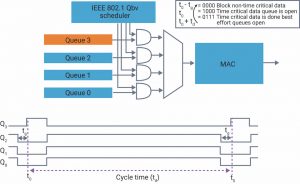 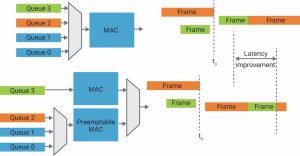 Cyclic queuing and forwarding supports known latencies regardless of the network topology. Its main role is to make network latencies more consistent across bridges. See Figure 3. According to the IEEE P802.1Qch standard, the cyclic queuing and forwarding amendment, “specifies a transmission selection algorithm that allows deterministic delays through a bridged network to be easily calculated regardless of network topology. This is an improvement of the existing techniques that provides much simpler determination of network delays, reduces delivery jitter, and simplifies provision of deterministic services across a bridged LAN.” 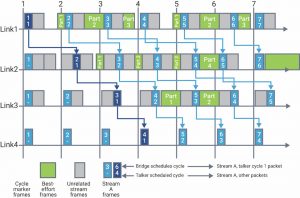 Per-stream filtering and policing enables a bridge or endpoint component to detect whether components in the network are conforming to the agreed rules. For example, a node gets allocated a certain amount of bandwidth and when this bandwidth is exceeded due to a component failure, or malicious act, action can be taken to protect the network. This standard includes procedures to perform frame counting, filtering, policing, etc. Policing and filtering functions are useful for detecting and enabling the elimination of disruptive transmissions, thus improving the robustness of the network.

Frame replication and elimination supports seamless data redundancy. It detects and mitigates issues caused by cyclical redundancy check (CRC) errors, broken wires, and loose connections. The time-critical data frame is expanded to include a sequence number and is replicated where each frame follows a separate path in the network. If the separate paths rejoin at a bridge or merge point in the network, duplicate frames are eliminated from the stream, allowing applications to receive frames out of order. See Figure 4. 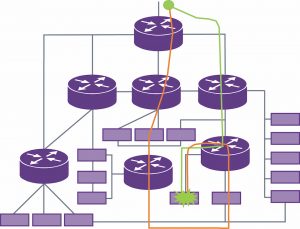 For example, when an adaptive cruise control system sends a signal to the control system to maintain a certain speed and distance from the car ahead, separate paths are created across the network to enable this signal and signals from other applications to travel seamlessly. Once the signals merge together, duplicate frames are eliminated to allow uninterrupted signal transmission. The IEEE defines three implementations of frame replication and elimination where the talker sends the signal and the listener receives the signal:

The TSN specifications, and other standards such as IEEE P802.1Qcc and P802.1Qcr, have evolved to help automotive designers be more certain that the vehicles they design will be safe. Designers producing SoCs for automotive applications, especially for ADAS, can take advantage of the standards to ensure that safety-critical data flows through their designs as necessary to ensure correct operation.

Automotive SoC designers also need to respect other, stringent standards, such as ISO 26262 covering functional safety, AEC-Q100 covering reliability, and advanced quality management strategies. For example, achieving ISO 26262 certification demands defining and documenting all processes, development efforts, standards, and safety plans for the Automotive Safety Integrity Level (ASIL, A thru D) that the designer has chosen to implement. Similarly, the SoC and IP must be tested to meet very low defect densities measured in defects parts per million.

John Swanson is a senior product marketing manager at Synopsys.

A look at how DDR DRAM is being adapted for use in automotive systems, and the demands its use puts upon interface IP for SoCs.