In the first part of this series, I looked at the exceptionally large changes in 2015 that impacted the semiconductor industry. So what’s ahead in 2016? The upcoming year will inevitably continue to see a lot of merger and acquisition activity but it will also be a year of ‘digestion’ of the acquisitions. In addition, the building momentum in automotive electronics will accelerate as companies reveal more about their strategies for driverless cars, advanced driver assistance (ADAS) features, in-vehicle infotainment and a host of new capabilities coming from automotive connectivity. And the new generation of data server architectures will intensify the race for dominance in the support of IC chip sets, with some of the winners emerging and others created through acquisitions or alliances.

Looking ahead, the nearly $160B in 2015 acquisitions, plus the continuing stream of new acquisitions, will stimulate change. Public commitments have been made by these companies regarding the ‘synergies’ that the mergers will achieve and these commitments will probably be met. That means many types of cost reductions. In some cases, reductions will be made in R&D but, in most cases, other efficiencies will constitute the majority of the synergies. R&D reductions will affect engineering employment and have an impact on some of the supply chain.

History indicates, however, that R&D reductions in the semiconductor industry tend to be more of a shift from who does the R&D, rather than an actual reduction in R&D. As seen in Figure 1, semiconductor R&D has increased in almost every year of semiconductor history. Electronic engineers have the lowest unemployment of almost any category tracked by the U.S. Department of Commerce. So, while it is likely that there will be some disruptions in 2016, the displaced engineers will be quickly swallowed up by competitors or will head out on their own to form new startups. 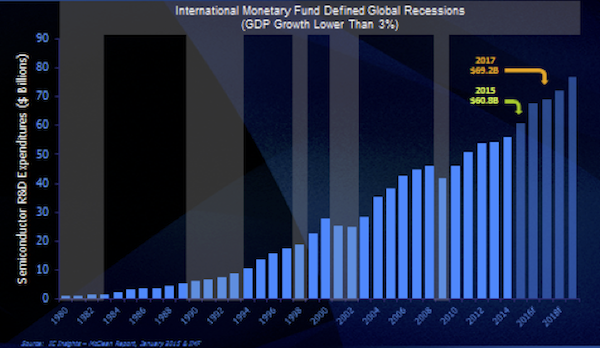 Semiconductor R&D as a percentage of revenue has been constant at 13-14% for the last 32 years. Will our industry suddenly discover that it can be more efficient, continuing to maintain or grow its revenue with a smaller percentage of R&D investment? It is quite possible, or even likely, that there could be a dip below this 14% constant level for a year (or two or three) as the merger digestion process proceeds. However, if history is any indicator, it should return to an upward trend whenever the next big product comes along that will start consuming large amounts of silicon, as happens in each product wave. The most recent product wave that drove growth was wireless electronics. As in the past, there will be new waves, maybe based upon the capabilities of the Internet of Things or perhaps some other semiconductor technology advancement.

The complexity of automotive electronics has been increasing rapidly for many years and now constitutes much, if not most, of the differentiation of new vehicles. In-vehicle infotainment, ADAS, driver information audio/video and, ultimately, driverless car capabilities have created major development challenges. Electronic content of automobiles now approaches 40% of the vehicle bill of materials and the development of embedded software has become one of the most significant parts of automotive design.

As we move into 2016, the pace will continue to accelerate. Over twenty auto manufacturers have created Silicon Valley-based business development and innovation scouting teams over the past 10 years.

In addition to the challenge of designing chips to facilitate the functions of the ‘connected car’, the EDA industry is rising to the challenge of creating new design automation tools to create and verify the electronic systems and electrical connectivity of cars. At the same time, embedded software is becoming a much more important part of EDA. As this system design trend progresses, the methodologies that have automated almost all of the design of integrated circuits will be applied to the design of automotive and aerospace products, creating a new revolution of growth in technology. 2016 will be a very important year as most automotive OEMs and Tier One suppliers focus on electronic design and embedded software as the most important technologies driving their futures.

The battle for the data center

Another major battleground for semiconductor companies in 2016 will be the challenge of the data center. Big data, cloud virtualization and social networking have driven massive needs for data processing and storage capacity. Immense data centers are being constructed with fundamentally new architectures to optimize power, performance, cooling and security. Compared to traditional data centers, the new generation must support 75% of its data transfers within the data center, thus requiring fundamental changes from our classical hierarchical computer networks. Big opportunities exist for suppliers of optical communications devices, switch appliance ICs and chips for the servers. Mergers and alliances are driving alternative approaches. The total market for data center equipment is approaching $200B, with semiconductor content near $30B, and the fastest growing part will be optical data components.

An alphabet soup of AI, HPC, 5G and the IoT has finally seeded creation of a design infrastructure for silicon photonics.