Neil Songcuan is a senior product marketing manager, responsible for the FPGA-based Prototyping Solution at Synopsys.

About 70% of ASIC designs use FPGA-based prototyping for system validation. The technique’s rising popularity is being driven by two trends.

The first is an increase in the number of software elements, such as applications, drivers and firmware, which need to be developed and validated in SoCs.

The second is the growth in overall hardware complexity when a design combines IP from multiple sources, advanced processors and high-speed external interfaces.

Can traditional FPGA-based prototyping boards scale to meet the challenge presented by the combination of these two trends? From our perspective, we’ve reached something of an architectural traffic jam.

Traditional prototyping boards use a structured architecture. This has predefined interconnects which, in the current design environment, limit a user’s ability to do early IP validation and then port that IP to a full prototyping system.

Think first of an FPGA-based prototyping board as being like a large city, and then of the infrastructure such a city requires.

Moreover, this infrastructure perhaps worked when the neighborhoods were founded and all their users stayed in their original places – but nothing stays the same forever. If, over time, nearly everyone who lives in one neighborhood starts working in another, some of the city’s arterial routes will be overwhelmed with traffic while others progressively empty. To add to the existing challenge, there’s no easy way to divert the traffic, or expand the freeway.

What we need to meet today’s design challenges is a prototyping architecture with flexible I/O ports that are defined by the user. Prebuilt interconnects lead to congestion. Such an architecture can address the changes now occurring from one design to the next. It enables SoC validation teams to reuse the FPGA-based prototyping system with a variety of design styles and projects. This is the philosophy that has been adopted for the development of the Synopsys HAPS-70 prototyping system.

The HAPS-70 architecture is completely symmetrical, starting with the  S12 system. It supports up to 12 million ASIC gates and has more than 1,000 definable ports on each board. With so many more ports, the number of configurations available exceeds what any design today will need, even at the entry level. The HAPS-70 system also scales to the S144 system, which supports up to 144 million ASIC gates.

This architecture means that your ‘city’ can have fully configurable interconnects, according to need. This flexibility also means that IP developers can create powerful FPGA prototypes using a smaller system and validate any specific software drivers, applications and firmware on them.

The design in Figure 1 contains multiple IP blocks from third party vendors or legacy designs that are already fixed; high-performance, external interfaces based on standard protocols; and multiple ARM processor cores. With a flexible architecture, even at this stage users can undertake early IP validation to check the MIPI, HDMI, and USB 3.0 interfaces in parallel. 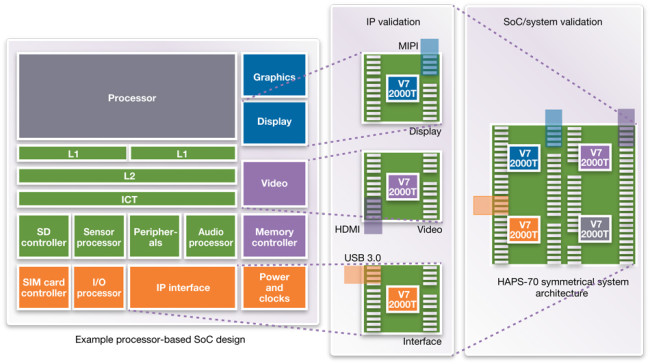 When the individual IP validation is complete, the implementation and scripts used to optimize and validate the IP can be reused in a larger HAPS-70 system for the full SoC-level FPGA prototype. The SoC validation team can then focus on interconnects between various blocks at the SoC level, as the individual blocks have already been validated. This dramatically lowers bring-up time.

With the need for platforms that support IP- and SoC-level designs for system validation, users are already driving the market toward common, transferrable hardware platforms. Any mix of hardware prototypes that can only be used for one kind of project is no longer enough.