To make the job easier, a consortium of companies known as the Linaro organization is developing a hardware testing infrastructure and software testing framework called LAVA.

The Linaro Automation and Validation Architecture (LAVA) is a system for deploying operating systems on physical and virtual hardware. LAVA can be used for simple boot testing, operating system testing and system-level testing, although extra equipment may be required for system tests of target hardware. Results are tracked over time and data can be exported for further analysis.

LAVA is a collection of participating components including:

LAVA uses the concept of user jobs and tests. LAVA jobs are device-independent JSON files that define which software image to deploy on the device under test and what to do to execute it. LAVA tests are invoked by a job using the “lava_test_shell” action and pointing to a test file (written in YAML).

The LAVA component that interacts with the actual device is the LAVA dispatcher, which reads the user jobs and executes the generic actions in a specific way according to the target device. Integration between LAVA and the VDK technology happens at the dispatcher level.

Figure 1 shows how the integration works. 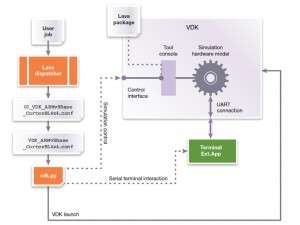 The first thing to look at is the user job. An example of a simple job file is shown in Figure 2, which shows how the job sets its name (vdk-test), the target device where to execute (01_VDK_ARMv8Base_CortexBL4x4) and the set of actions to be performed. The action “deploy_linaro_kernel” will load the software image, file system, bootloader, etc., indicated by its parameters, onto the target device. The software files can be in the local machine (using file://) or can be downloaded from the web (using http://). The action “boot_linaro_image” will tell the device to boot with the new deployed image.

The LAVA Dispatcher will start running the job by first picking the device information specified by the target parameter. By convention, the dispatcher will try to open the “01_VDK_ARMv8Base_CortexBL4x4.conf” file located in the folder “/etc/lava-dispatcher/devices”.

A LAVA job must always include a target device where the job will be executed, which represents an instance of a device type and can include configuration options that override the options of the device type. In this example, we define an instance of the “ARMv8Base_CortexBL4x4” VDK platform, which is an 8-core ARM-based SoC simulation model based on the big-LITTLE architecture.

The only mandatory entry in the target configuration file is the name of the device type that is being inherited. In this example, the target configuration file will inherit all its options from the “VDK_ARMv8Base_CortexBL4x4.conf” file. This is shown in Figure 3. This file is by convention located in the folder “/etc/lava-dispatcher/device-types”.

The device type configuration file (VDK_ARMv8Base_CortexBL4x4.conf) contains the configuration options for the VDK. Those options are used to select and configure a LAVA client (part of the LAVA dispatcher) that manages the execution of a job on a specific target device. The most relevant configuration options are illustrated in Figure 4. The client_type is used to select what LAVA client to use for handling the target device. For this we select the generic “vdk” client (described later). The simulator_command tells the LAVA client which command to use to launch the VDK. Typically a shell script sets the appropriate variables and launches the simulator model and the VDK tools in batch mode. Finally, the tester_ps1_pattern option contains the Linux prompt that appears once the Linux boot of the software image under test is finished. This pattern is required for proper synchronization between LAVA and the software running on the VDK.

A dedicated LAVA client implementation is required for the dispatcher to manage the execution of LAVA jobs in a VDK. Therefore, a generic VDK client has been implemented, as a Python file (“vdk.py”) and copied into the device folder of the LAVA dispatcher installation. Whenever a device type configures the client type as a VDK (i.e. client_type = vdk), the file is picked up by the dispatcher. The LAVA VDK client (or client from now on) works as follows:

With this infrastructure in place, the LAVA dispatcher can execute jobs using a VDK target with any other target device. The VDK targets and device types can be added to the LAVA Scheduler (in the LAVA Server) to automate the dispatch and execution of jobs.

The end result of this process is a system that enables users to manage and run many testing jobs in parallel.

Victor Reyes is a technical marketing manager in the System Level Solutions group at Synopsys. His responsibilities are in the area of virtual prototype technology and tools with special focus on automotive. Reyes received his MsC and PhD in electronics and telecommunication from University of Las Palmas, Spain, in 2002 and 2008 respectively. Before joining Synopsys, he held positions at CoWare, NXP Semiconductors and Philips Research.

How to accelerate many aspects of software testing by using virtual prototypes to stand in for target hardware from early in the development cycle.