System designs have traditionally achieved reliability through redundancy, even though this inevitably increases component count, logic size, system power and cost. The article describes the design separation feature in Altera software that seeks to address these as well as today’s conflicting needs for low power, small size and high functionality while maintaining high reliability and information assurance.

FPGAs are a ubiquitous part of today’s processing landscape. Their use has extended from their long-established role as glue logic interfaces to the very heart of the advanced information-processing systems used by core Internet routers and high-performance computing systems. What
remains common throughout this evolution is the drive to integrate more functionality in less space while decreasing power and cost.

The concept of reliability engineering has been driven by the U.S. Department of Defense (DoD) since its first studies into the availability of Army and Navy materiel during World War II. For example, the mean time to failure (MTBF) of a bomber was found to be less than 20 hours, while the cost to repeatedly repair the bomber would eventually reach more than ten times the original purchase price. Subsequently, the total life-cycle cost has become a critical metric for system specification and design.

In each case, the designer’s goal is to shrink the PCB size and reduce the number of components needed for a particular application. This has been the trend in the electronics industry for decades, most recently in system-on-chip (SoC) ASICs and today progressing to SoC FPGAs. Developing SoC ASICs consolidated external digital logic into a single device. This paradigm progressed successfully until the cost and schedules of ASIC development exceeded market money and time budgets. With ASIC costs having grown so much, system designers are increasingly turning to FPGAs where performance and logic densities enable logic consolidation onto a reprogrammable chip.

However, while the growth in SoC designs has been steady for many years, the design and complexity of FPGAs have until now prevented the integration of redundant designs. Many system and security analysts deemed the analysis necessary to verify separate and independent datapaths too difficult.

By working with certification authorities, Altera has simplified complex FPGA device analysis and ensured separate and independent datapaths. By providing users with FPGA tools and data flows that have this analysis in mind from the start, we enable designers to consolidate fail-safe logic designs into a single FPGA fabric. This allows them to meet development budgets and also the requirements of high-reliability and high-assurance applications.

Information-assurance equipment must provide a high level of trust in the design and implementation of the cryptographic equipment. Guaranteeing a complex system design is trustworthy requires robust design standards and system analysis, and several security-design standards and evaluation bodies exist. While explaining the design requirements and evaluation criteria used by each of these bodies exceeds the scope of this article, an overview of their evolution and complexity is shown in Figure 1.

IT systems have the greatest influence on information assurance. With an ever-increasing number of infrastructure-control systems, and with corporate and personal information accessible via the Internet, they are increasingly relied on to protect sensitive information and systems from hackers and criminals.

To provide information assurance on the Internet, a user must not only inspect data for viruses, but also protect sensitive information by using security and encryption technologies such as IPsec and HTTPS. While the HTTPS cryptographic algorithm is typically implemented in software running on a computer platform, IPsec and virtual private network (VPN) encryption applications usually require higher performance and rely more heavily on hardware. Network IT equipment must be evaluated at all appropriate levels to ensure trust in the overall system.

This trust must be proven by hardware analysis of each IT component, ensuring that information-assurance levels meet the security requirements of either the Common Criteria or Federal Information Processing Standard (FIPS) 140-2 or 140-3. As shown in Table 1, this analysis is complex and can greatly extend the design cycle.

The financial industry today drives the development of commercial cryptography and cryptographic equipment. Its need for information assurance has become ever more pervasive, as its use of technology has grown from inter- and intra-bank electronic data interchange (EDI) transactions, to public automatic teller machines (ATMs), to high-performance cryptographic applications driving electronic commerce.

Like the military, commercial electronic commerce needs commonly accepted standards for the design and evaluation of cryptographic hardware. The financial industry’s need for cryptographic interoperability has been a key differentiator in this market. Commerce extends beyond national boundaries and therefore so must the cryptographic equipment it uses. A major complication in this landscape is the classification of cryptography as a regulated technology under the International Traffic in Arms Regulations (ITAR). High-performance electronic-commerce cryptographic equipment is developed mainly by large server manufacturers that can invest in the expertise and long design cycles necessary to create FIPS 140-2-certified modules.

Industrial applications also take advantage of the design separation and independence available from FPGAs. For example, increasing numbers of embedded control units (ECUs) are used in automobiles with increasing complexity and functionality. ECU designers must maintain reliability while reducing size and cost. An ability to separate redundant logic within a single FPGA allows them to reduce the number of system components while maintaining fault isolation.

Information-assurance and high-reliability applications currently require at least two chips to ensure the logic remains separate and functions independently. This ensures that a fault detected in one device does not affect the remainder of the design. In cases where design separation is critical—such as financial applications, where data must be encrypted—data must not be able to leak from one portion of the design to another in the event of an inadvertent path being created by a fault. In cases where high reliability is critical—such as industrial systems where entire manufacturing lines may be shut down if one piece of equipment fails—redundant circuits continue to control the system in the event of a main circuit failing, ensuring little to no downtime. 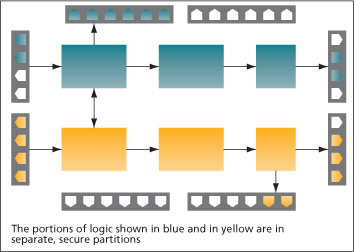 The design separation feature in the Quartus II design software allows designers to maintain the separation of critical functions within a single FPGA. This separation is created using Altera’s LogicLock feature. This allows designers to allocate design partitions to a specific section of the device. When the design separation flow is enabled, as shown in Figure 2, each secure partition has an automatic fence (or ‘Keep out’ region) associated with it. In this way, no other logic can be placed in the proximity, creating one level of increased fault tolerance.

However, to ensure true separation, the routing also must be separated. Therefore, all routing is restricted to the LogicLock area of the design partition. This means that the fence region does not contain logic and does not allow routing to enter or exit the fence, ensuring the region’s physical isolation from any other function in the device. Routing interfaces can then be created using interface LogicLock regions. These interface LogicLock regions can route signals into or out of separated regions by creating an isolated channel between two separated partitions. This is effectively the same as using two physical devices to ensure separation.

Altera has designed the Cyclone III LS fabric architecture to ensure the separation results in an increased fault tolerance with the minimal fence size, enabling designers to use over 80% of the resources for their design. The design separation flow also enables specific banking rules that ensure the separation created in the fabric for critical design partitions extends to the I/Os. The Cyclone III LS packages also are designed to support such I/O separation.

Requirements for high-reliability and information-assurance systems have many similarities. Both systems require design separation and independence, as each system requires redundancy to ensure proper design operation in the event of hardware faults. Traditionally, the implementation of redundancy increases system size, weight, power and costs because this redundancy is implemented at the board level. To reduce these factors, low-power FPGA processes can be used with a high-assurance design flow to meet stringent NSA Fail Safe Design Assurance requirements.

By ensuring design separation and independence, redundant logic can be transferred from the board level to a single FPGA as part of a SoC design approach. Combining low-power, high-logic density and design-separation features allows developers of high-reliability, high-assurance cryptographic and industrial systems to minimize design development and schedule risk by using reprogrammable logic, and to improve productivity by using a proven incremental-compile design flow.

More commonly associated with SystemVerilog, IDEs can also greatly help users of the popular HDL for FPGA, mil/aero and other designs.