An exclusive extract from Cadence Design Systems’ Mixed-Signal Methodology Guide provides an excellent overview of its discrete topic and a flavor of the book as a whole.

The Mixed-Signal Methodology Guide: Advanced Methodology for AMS IP and SoC Design, Verification and Implmentation was published by Cadence Design Systems this Summer.

It provides a broad but also, where necessary, deep overview of the techniques needed to address today’s mixed-signal designs. The authors have tailored it to serve as a reference for a catholic readership of analog, digital and mixed-signal designers, as well as verification and physical implementation engineers and managers.

This exclusive extract from Chapter 4, “Mixed-Signal Verification Methodology”, specifically addresses the challenges presented by verifying intent for low power, a subject of ever increasing importance, and gives a good flavor of how the Mixed-Signal Methodology Guide has been well pitched at its wide target market.

The book is now available for purchase on both Lulu and Amazon.

The modern day SoC is almost always a complex mixed-signal system. The verification of such a system requires careful planning and execution not only in the digital and analog sub systems separately, but in an integrated fashion where relationships between the digital and analog functionalities in the SoC are taken into account.

In the previous generation of verification planning, it was common practice to create a detailed plan and specification goals of the digital islands of an SoC, and then approximate the analog functionalities of the chip by assuming simple discretized models of the analog blocks. You thereby created a convenient system where the analog parts of the chip could participate in the overall verification process by essentially appearing as a digital approximation. However, the systems of today can rarely be approximated to this level of simplification without sacrificing a significant part of the verification goals.

It is now common for the digital and analog subsystems to have multiple feedback paths and complex relationships with each other. To accurately verify such systems, it is imperative that the verification planning and execution process involves both analog and digital as integral parts of the system. A central aspect of this approach is to define and apply traditional verification methodologies to analog and mixed-signal parts of the design without sacrificing the accuracy of the analog design blocks.

Low power is one of the more crucial aspects of verification of an SoC at this time – if not the most crucial. With the introduction of analog functionality in the system, the process becomes even more complex, since verification planning now must include analog and digital interactions in addition to defining power verification goals on the digital blocks of the chip. Consequently, mixed-signal modeling and simulation tools need to evolve to meet these requirements of functional verification. This extract describes this evolution first by introducing some common low-power related concepts, followed by a detailed account of the low-power aware value conversion process across A/D boundaries.

In this book, Common Power Format (CPF) has been chosen to be the vehicle to express power intent.

This section explains some basic power intent concepts, not necessarily in the context of mixed-signal designs. This will establish the background for the reader to understand the mixed-signal aspects of these concepts when they are elaborated.

A power domain is an abstraction for a collection of instances that use the same power distribution network during normal operation and that either can be simultaneously switched on or off, or treated as always on.

Isolation logic is typically used at the output of a powered-down block to prevent floating, unpowered signals (represented by unknown or X in digital simulation) from propagating out of powered-down blocks. The outputs of blocks being powered down need to be isolated before power can be switched off and they need to remain isolated until after the block has been fully powered up. Isolation cells are placed between two power domains and are typically connected from domains powered-off to domains that are still powered-up.

When a power domain is powered down, the states of certain sequential elements (registers, latches, flip-flops) in the power domain may be saved and retained for the entire shutoff period, to enable faster recovery on restoration of power. The states will be restored to the values before shut-off to accelerate the power-up process. These sequential elements can be implemented by special state retention cells.

Power shut-off is the technique to turn off power supply to parts of a chip. Prior to shutting down power to a block, the signals connected to the affected block must be isolated and key states may be retained so that power up sequences can be optimized. This is shown in Figure 1. When performing functional verification on a mixed-signal chip where parts of the chip go through a power-up and power-down sequence, the electrical voltage corresponding to a digital driver must be specified so that a powered-down state can be correctly represented on the analog side. More details on power shut-off voltage will be explained in the succeeding sections. 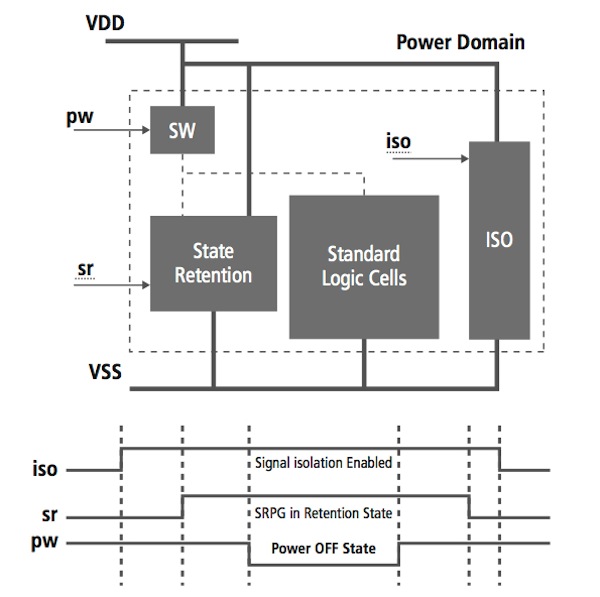 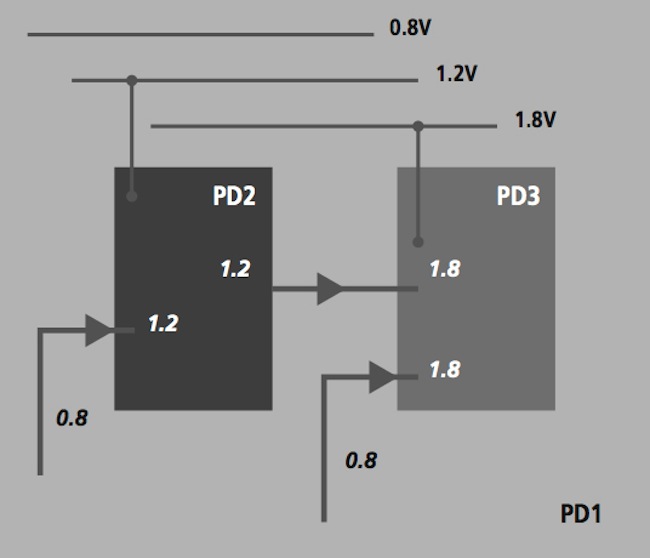 In a power aware mixed-signal simulation, it is common for a block in a discrete domain with power intent specified on the block using CPF to connect to another block belonging to the continuous domain. In such a situation, the process of logic-to-electrical or electrical-to-logic value conversion must take the power intent aspect into account. It is against this background that power-aware value conversion aspects and requirements of mixed-signal simulators are introduced and now being implemented by vendors.

In order to explain the role of a power-aware value conversion, consider Figure 3. 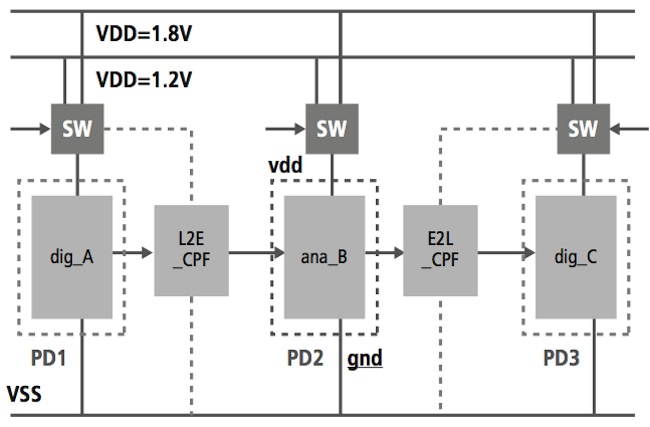 The power-aware logic to electrical conversion module, denoted by L2E in Figure 4, is responsible for reading a logic signal and its associated power domain information, and then producing the appropriate electrical voltage at the output.

The conversion process involves the following:

Figure 5 provides a pictorial representation of a power-aware logic to electrical value conversion process as the power domain transitions from a 1.8V nominal condition to a 3.3V nominal condition before turning to a shut-off state.

The fundamental premise behind the need for a power-aware electrical to logic conversion is the fact that an analog instance, whose behavior is expressed and simulated in the continuous domain, can also reside in a switchable power domain. This is most commonly seen when the user decides to switch the abstraction of a block, residing in a power domain PD1, from a digital model to an analog one, for reasons such as higher accuracy or measurement of performance characteristics. If the output from such a block is driving a digital instance residing in a power domain PD2, then the expectation is that the behavior of the input to the digital block would be consistent regardless of whether the block was implemented in analog or digital. 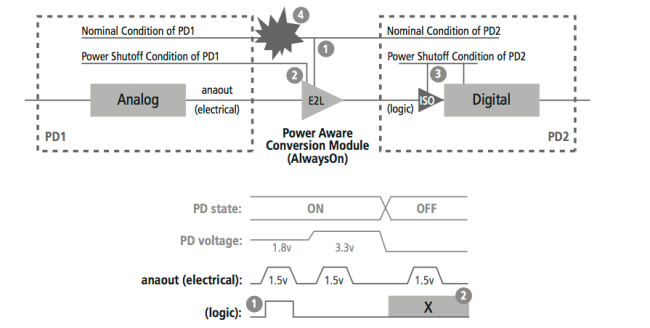 The following factors need to be noted when performing an electrical to logic value conversion in a power-aware fashion.

It is quite common in mixed-signal verification to switch the representation of a module from digital to analog or vice versa. To run such mixed-signal simulation, an analog voltage source for the power supply will typically be provided. In cases where part of the mixed-signal system is designed with power awareness specified using, say, CPF, the voltage source becomes a part of design function. The power supply to analog blocks, even for a functional verification, needs to be defined in a way consistent with the system-wide power intent. 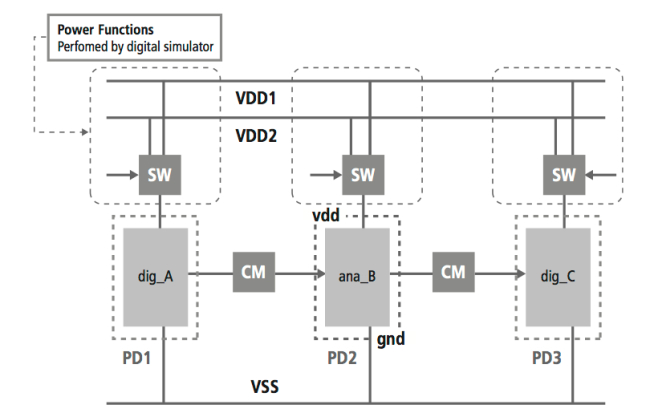 In Figure 7, the digital blocks, dig_A and dig_C, are represented in Verilog, and their power behavior is defined using CPF. Assume that the analog block ana_B also has some low-power characteristics and that the power behavior is expressed in the same format as the digital blocks. The code snippet below shows how the user specifies a power and ground connection for the ana_B block that would be used when ana_B is represented as an analog component, possibly as a SPICE netlist or a schematic. The functional verification tool can synthesize a power supply model in accordance with the power domain specification of the block ana_B and then make a virtual connection of the power supply model to the power connection of ana_B, thereby simulating the effect of power domain specification – using the same language that is being used for pure digital blocks elsewhere – on the analog blocks.
Specification for power and ground pins in CPF:

The block ana_B belongs to a power domain PD2. When ana_B is changed to an analog representation, such as a SPICE sub-circuit with power supply port vdd and ground port gnd, the functional verification process will continue to work applying the same power supply characteristics as laid out in the specification of power domain PD2 to the analog block ana_B.

Prabal Bhattacharya has a Bachelor of Engineering degree from Jadavpur University in India in Electronics and Telecommunications. He has been working in various groups in Cadence’s Analog and Mixed-Signal simulation solution for the last 15 years and currently holds the title of R&D Architect. His special area of interest includes mixed-signal simulation and verification, compiler techniques for various analog and mixed-signal languages and software architecture and reuse in simulation products.

Don O’Riordan is a Senior Architect for the Cadence Custom IC and Sign-off Division with over 20 years of experience in design and verification within the EDA industry. He has held positions at Silvaco on SPICE Modeling, at Transmeta Corporation on CPU verification, and at Cadence on a variety of design and verification tools including SPICE circuit simulation, AMS mixed signal simulation and debug, and the Virtuoso schematic capture and analysis environments. Don is the holder of seven patents, and a Masters Degree from the National University of Ireland.

The home page for the Mixed Signal Methodology Guide provides a full breakdown of chapters and also a link to a further opportunity to preview Chapter 1, “Mixed-Signal Design Trends and Challenges”. As noted earlier, the book is now available for purchase on both Lulu and Amazon.