EDA vendors and internal CAD teams use Verific parsers for tool development. Here’s how one company developed its strategy for this popular technology.

Verific Design Automation specializes in Verilog, VHDL and SystemVerilog language processing sub-systems. Its users develop software where Verific-based technology serves as the front end for a wide range of EDA and FPGA design tools. These tools are used during analysis, simulation, verification, synthesis, emulation and test.

This article discusses the use of Verific technology by our team at the Really Useful Software and Hardware Company. We hope these experiences will be of use to the many other Verific users out there and we also describe our own efforts to extend the technology with a series of ‘apps’ addressing common tool developer issues.

Before getting into our use strategies, we need to start with a quick backgrounder on Verific’s offering.

Determining how best to choose between these levels will be one of the main themes of this article, but first we need to look a little closer at each type.

The parse tree representation is generated during analysis and traversed using a walker. A range of walker templates ensures that each syntax category can be easily traversed. Static elaboration further expands the parse tree by resolving parameters as well as generating statements and other statically determinable aspects of the HDL.

So, as an example, a developer can use the ‘VhdlExpression’ walker class to add a type checker that catches any mismatch in the sizes of a VHDL relational operator. The Verific code elaborates the walker so that the developer can get a type for any identifier reference. Each identifier instance is represented as an ‘IdReference’ that in turn refers to an ‘IdDefinition’ field from which all type information about the identifier can be extracted.

The parse tree can be structured to resolve data types as necessary for, say, such instances as the evaluation of recursive functions or the resolution of dynamically assigned ranges in VHDL. Mixed-language support is provided using a ‘vl_types.vhd’ package that permits various type conversions.

Full elaboration translates a parse tree to a netlist by way of synthesis. With a little care, operators can be preserved and a bus-oriented or unflattened data model extracted. This is called the ‘operator netlist’.

The operator netlist is useful because it provides the semantics of the language via operators, including decoders, shifters and state elements. It also has a wide operators function for bus level structures (this function is known as a ‘netbus’ or ‘portbus’ in Verific terminology).

The same netlist view is generated for all languages. This provides a good starting point when a project includes tasks such as writing a simulation accelerator applicable to synthesizable designs written in any supported HDL.

Moreover, because Verific takes care of the language processing, the developer needs only to understand the netlist. A Verific netlist itself follows the traditional and familiar Electronic Design Interchange Format (EDIF)-type hierarchy of library, cells, instances, views and ports.

Using one of the APIs in the Verific toolkit, the user can flatten the operator-level netlist to primitive gates, such as PRIM_AND, PRIM_OR and PRIM_XOR. At this fourth level of elaboration, the full logic of the design is available.

The various abstraction levels are also summarized in Figure 1. 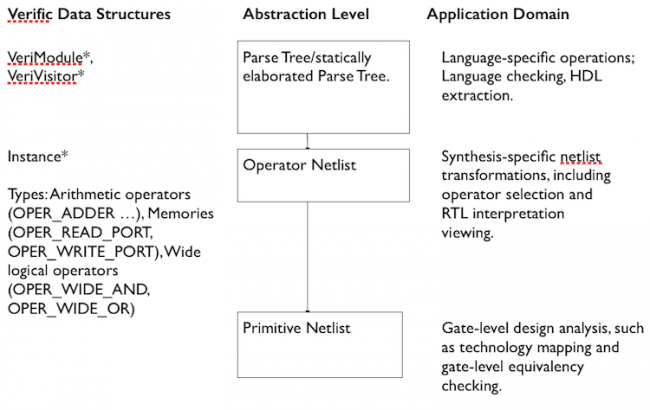 Integrating Verific into a software flow

Once the appropriate Verific libraries have been linked, Verific’s C++ APIs can be called directly from a developer’s code. The APIs used most often are‘Analyze’ and ‘Elaborate’. The Verific data structures are usually entered through either the top-level parse tree module (Verific API: veri_file::GetTopModules) or the netlist (Netlist::PresentDesign()).

At RUSHC, we have run Verific evaluations based on three strategies that address this challenge:

Options (a) and (b) allow all Verific APIs to be accessible natively from customer code. But it is option (c) that offers the broadest set of use cases by quickly allowing core algorithms to be ported to new structures. This option also keeps the style adopted by boost libraries.

Consider this representation of a ‘cut’ in a netlist, the cut being nothing more than a group of pins delineating a region of a netlist. The abstract class for a cut is shown in Figure 2. 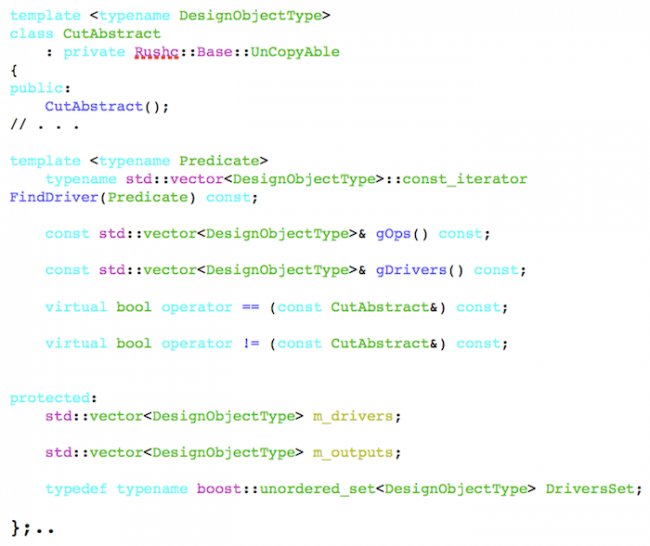 We used this approach to build a set of library routines and useful applications for formal verification and synthesis that make full use of the Verific database and that are broad enough for use on multiple structures. Specifically, RUSHC was able to port a full formal verification method approach for generating timing exceptions from the Verific database to a customer database in a matter of days.

We found that the key to success lay in determining the best level of abstraction in the Verific flow: parse tree (statically elaborated or not), operator netlist or primitive netlist. Problems will arise if this decision is not thought through carefully. The following scenarios show how RUSHC made its choices on three different projects and could help you do the same.

This project required the development of a high-speed technology mapping solution. Operators needed to be extracted by library operators and novel cut generation and matching algorithms devised.

The primitive netlist level of abstraction was chosen. This decision freed EDA developers from having to code HDL processing/elaboration. They could instead focus on innovation through algorithm development. The Verific netlist produced by elaboration was further improved by the SAT Sweeping technique for simplifying an AND/INVERTER graph (AIG) [6]. A template for a mapping and matching solution was devised that could be run on both the Verific netlist and the data structures used after place-and-route.

This project illustrated the value of creating templates and the stability and efficacy of the Verific database.

This project required the extraction of novel instructions (including MULT, LD, ADD, and STR) with hardware specific ones (e.g., TAP x [10:0]) to fish bits out of busses from an HDL for execution on a simulation hardware accelerator.

The client initially wanted to roll its own elaborator and was investing heavily to resolve complicated and generic HDL issues.

However, we determined that the project only needed the synthesizable HDL subset.

An operator level netlist elaboration was used as the basis for the machine instruction generation. Within a few weeks, the instructions were being generated.

The focus of the project shifted to establishing the value of high-speed simulation acceleration from resolving complicated HDL issues. Lesson learned: avoid becoming an HDL processing guru unless that is your core business.

This project required the development and application of timing exception proving algorithms using formal methods such as AIG techniques.

From the start, data structures beyond the Verific netlist were required. So were Verilog counter examples and, where possible, references to the users’ source HDL had to be inserted.

The Verific netlist database was chosen as the starting point, freeing the EDA team from learning HDLs. A utility for translating the Verific netlist to an ABC [7] AIG was devised and a method for correlating inputs/outputs and user nets in both netlists was constructed. Verific’s code has an API for marking nets that appear in the user’s source HDL as a user net, ‘net -> isUser()’.

Our experiences at RUSHC led us to develop a wishlist of generic utilities for the Verific code base that it would be useful to develop. It included:

To fill some of these gaps, we have gone on to develop the Veriapps (for Verific Applications) package. This library of utilities operates on the Verific data structures. The packages shown in Figure 4 below are accessible via C++ or the Verific Perl interface, and the code is available in source form. 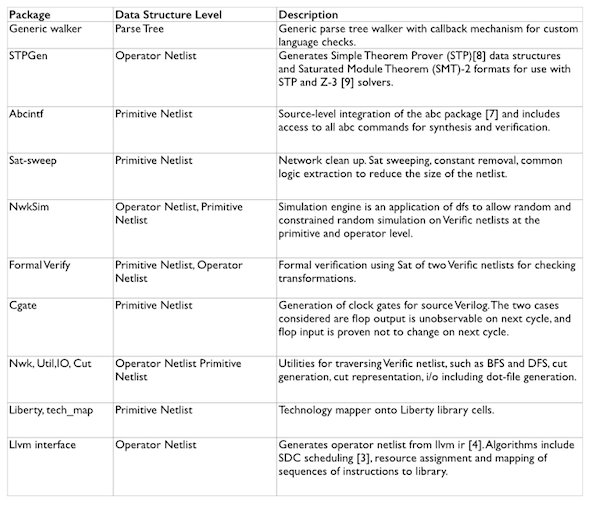 It is often said that youshould stick to their core competencies. Verific’s HDL parsers and elaborators let those of working on design software do just that, saving time and optimizing resources. Our hope now is that RUSHC’s Veriapps package will provides a tool kit that complements them, based on real-world experience with the technology.

RUSHC comprises a team of EDA engineers with extensive experience developing Verific-based applications. It has offices in both the United Kingdom and Armenia. Find out more about the company at www.rushc.com.

Edvard Ghazaryan is director of RUSHC’s Armenian office and a senior member of the technical staff, specializing in compilers and language processing using Verific. He is a graduate of Armenia’s Yerevan State University, the Department of Applied Mathematics and Information, with Bachelor of Science and Master of Science degrees.

Hovhannes Ter-Milqsetyan is a member of the technical staff at RUSHC, specializing in the development of Formal Verification Applications using Verific’s products. He holds a Bachelor of Science degree in Mathematics and Computer Science from Armenian State Pedagogical University in Armenia.

Tigran Sargsyan is a member of the technical staff at RUSHC, specializing in the development of synthesis tools using Verific’s products. He holds a Bachelor of Science degree in Computer Science from Yerevan State University in Armenia.

Vigen Gasparyan is a member of the technical staff at RUSHC, specializing in the development of synthesis tools using Verific’s products and is a graduate of the State Engineering University of Armenia.

How Mentor develops and works with partners to prepare each version of its Calibre DFM platform to be ready for the introduction of each new process node.