This year could see emerging economies overtake North America and Western Europe combined as markets for consumer electronics (CE), according to research that was released at the 2011 Consumer Electronics Show (CES).

In their Digital World forecast, the US Consumer Electronics Association (CEA) and European agency GfK still have the two developed regions’ combined share slightly ahead at 39%. Asia and South America will have 37%, led by the BRIC quartet: Brazil, Russia, India and China. Value will be $373b against $357b (Figure 1). 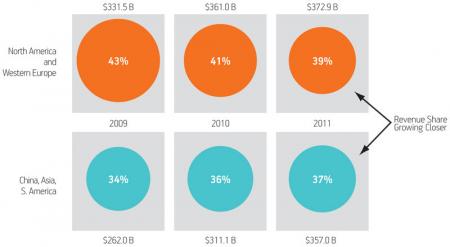 The global CE market could also exceed a trillion dollars for the first time, although the current Digital World prediction falls just short at $964b, up 10% on 2010’s $873b (Figure 2).

However, one question mark is an aggressive GfK forecast of 23% year-on-year growth for Western Europe in 2011. GfK bases this on a release of pent-up demand in the EU and adjoining states.

The CEA is forecasting 15% growth in North America for much the same reason and Steve Koenig, its director for industry analysis, told CES that his organization feels the European number “might be optimistic.”

One major concern over Western Europe is the impact of austerity measures in countries such as the UK, France, Italy and Spain. The public sector in these markets accounts for a comparatively high proportion of employment and therefore consumer spending.

A further factor in the European numbers is that they include Value Added Tax, the region’s sales tax system. Its rate varies considerably across the EU, and several countries temporarily cut VAT during the downturn to boost consumer sales. Those cuts are coming to an end. Then there is the potentially volatile currency rate, amid continuing credit market twitchiness over the euro.

With only $16b separating the two EU/US and Asia/South America forecasts, lower-than-expected performance from Western Europe could tip the balance in favor of the BRICs—a change that Koenig expects to see in the next couple of years anyway.

The growth of the BRICs and other predominantly Asian economies is already having a big impact on product design, with many sophisticated products now being released across the region rather than only for the perennially gadget-hungry Japanese market.

For example, LCD displays are gaining share worldwide. However, traditional cathode-ray tube (CRT) displays are showing surprising strength for digital TV in countries such as India, where consumers prefer smaller screen sizes and the electricity distribution infrastructure is less reliable. CRTs can run off battery power during outages.

That said, China is expected to account for 37 million unit sales of LCD TVs this year, slightly more than the 35 million sales expected in the more mature North American market.

Meanwhile in the burgeoning health and wellness sector, Asia is seen as the more rapid adopter. It is developing mobile communications infrastructure more quickly and there is greater government support for widespread adoption of new diagnostic technologies.

One leading health OEM said: “In the developed nations, there’s still a lot of debate about where these devices stand. Are they simply sources of information or are they diagnostic? That question has serious implications for their approvals regimes. In, for example, China or Singapore, you have governments that have populations demanding major improvements in healthcare and they can simply say, ‘Right, let’s do this.’”

As a result, the healthcare products being promoted for the US and Europe at CES tended to be stripped down versions of those they had already released for the professional medical market, or copies that could be sold to the public without the need for regulatory approval.

Asia’s push on mobile broadband is also influencing broader product functionality with greater emphasis on options such as mobile video—still nascent in Europe and the US but already a hit in countries like South Korea.

Still, 2010 was a good year for CE worldwide, after 2009’s 9% slump. Global sales recovered by 13% to reach a new high, said Koenig. “We’ve also had a pretty good holiday season by most measures,” he added.

The glamour performer, though, is tablet computing. Apple’s iPad had the sector to itself for most of 2010, with rivals such as Samsung’s Galaxy Tab only arriving toward Christmas. At CES, every major PC and mobile device OEM had something to offer, with about 100 products announced at the show. However, the devil dominated the detail.

According to the CEA/GfK research, portable computers represented 12% of the global CE market in 2007 and will be 18% of it in 2011 (Figure 3, p.8). Two important statistics here. The share of desktop PCs will go from 10% to 7% over the same period, the research says. However, more importantly, if portables reach 18% this year, it will give them a greater share of sales than mobile handsets, on course for 16%, although smartphones are now given their own category and this will reach 14%. Nevertheless, much of that trend has to be attributed to the tablet and netbook spaces. 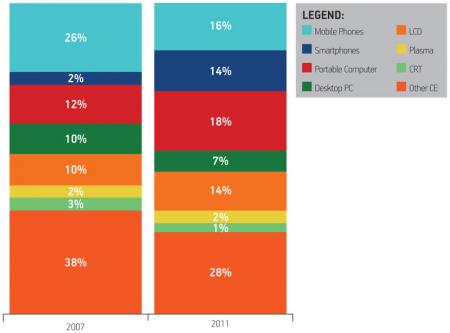 Demos of Blackberry’s Playbook with its proprietary operating system (OS) were still driven by Blackberry staff (to be fair, so were those of the iPad initially). A more significant admission came from Motorola Mobility (MMI) CEO Sanjay Jha, who showed off the forthcoming Xoom tablet but said his company was withholding demos because the Honeycomb 3.0 version of Google’s Android OS was not ready.

The open-source Honeycomb OS is optimized for tablets and could be a real step-change, supporting bigger displays and more processor-hungry applications. It could boost the capability of iPad rivals for 3G and incoming 4G cellular networks and seed new industrial, embedded and consumer designs.

MMI nevertheless had one of CES’ cooler ‘ready-for-primetime’ products in the Atrix 4G, a hybrid ‘laptop killer’. The smartphone has a 2GHz dual core processor and 1Gbyte of RAM. More importantly, the phone can be plugged into the back of a laptop-size screen and keyboard: portability with productivity when you need it. Lenovo had another Android-based hybrid, the IdeaPad U1 (aka ‘LePad’) where the screen can be detached from the keyboard chassis. But while available in China, sources suggest further regional launches also wait on Honeycomb.

Apple’s shadow loomed large over almost all tablet launches. CES represented a chance for companies to win column inches before, as one OEM admitted, “the first rev on the iPad comes along in the next couple of months and sucks all the oxygen out of the room.”

Certainly, the iPad has set the agenda for the other big theme that came out of CES2011: content everywhere. One of the most striking examples came in seeing high-end audio companies such as Dolby and DTS reconfiguring their technologies for use on virtually any platform from a state-of-the-art home theater through to your handset.

And this same theme dominated the stand offered by the world’s largest chipmaker, Intel. For sure, there were many tablets and netbooks launched using its Atom chipset and also promising to exploit the muscle offered by the new mobile versions of the second generation Sandy Bridge iCore chips. But for its own megabooth, Intel concentrated on TV everywhere so that, this time, laptops were connected to large displays not to give the masses a better view, but to show what an Intel-driven kit could deliver to an HD display.

With its integrated graphics, the iCore family is about more than just traditional or even evolving computing. Features such as Insider, Quick Sync Video and Wireless Display can help grab and distribute content up to 1080p. A four-minute HD video file can be converted for use on an iPod in 16 seconds, implying six minutes for a 90-minute movie. With up to six cores, the speed on the processors can be, the company claims, taken up to 3.7GHz using a ‘turbo’ overclocking technology. That places a massive chunk of processing power locally for consumers to transmit and enjoy content around the home and elsewhere.

Intel’s rivals—mainly AMD and those developing ARM-based alternatives to Atom—had similar strategies. Indeed, the fact that there was greater confidence to these marketing pitches underlined that this was a more optimistic show than Las Vegas has seen for several years, attracting 140,000 visitors from across the supply chain. We may not be totally out of the woods yet, but companies feel they can at last see the open plains beyond.