Operating at near-threshold or sub-threshold voltages reduces static and dynamic power consumption, at the cost of design complexity.

The quest for denser IC processes operating at lower power has seen a steady reduction in supply voltages, which cuts both static and dynamic energy consumption. Operating at near-threshold or sub-threshold voltages reduces this further, at the cost of having to overcome a number of circuit design and characterisation challenges.

In sub-threshold operation, as shown in Figure 1, the supply voltage is well below the Vth of the transistors. In this region, the transistors are partially On, but are never fully turned On. In today’s process technologies, this region is at about 200 – 400mV.

Near-threshold operation happens between the sub-threshold region and the transistor threshold voltage Vth, or around 400 – 700mV for today’s processes. 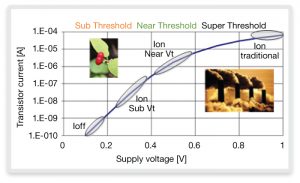 The challenges of using sub-threshold technology

Sub-threshold transistor operation is not new, but working with the techniques has challenges that have prevented it from being widely applied. 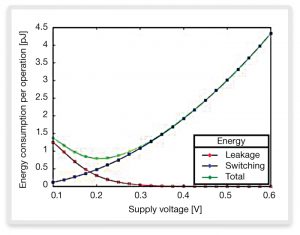 Sub-threshold circuits are much more sensitive to noise than those operating at higher supply voltages, with noise margins that are several orders of magnitude less. Typical super-threshold designs will see noise margins of hundreds of mV, which can drop to less than 100mV in a sub-threshold design. Standard-cell developers must try to design cells that claw back some of this loss of noise margin (NMH and NML in Figure 3).

Process and temperature variations are also more critical in sub-threshold designs as these can cause significant yield and performance problems.

Since most foundries’ standard-cell libraries are optimized to operate with supplies of ~0.9V (+/- 20%), their transistor models tend not to be accurate at sub-threshold voltages. Many IC vendors who want to use sub-threshold techniques are building their own standard-cell, memory and analog circuit libraries, which they can be sure are properly characterised at these challenging operating conditions.

A few IC vendors are starting to use near/sub-threshold techniques, especially in battery-operated applications such as the IoT. Synopsys and PLSense (South Yokneam, Israel) have worked together to implement Synopsys’ ARC processors and subsystems using PLSense’s sub-threshold libraries and design techniques, to understand the potential systemic energy savings. 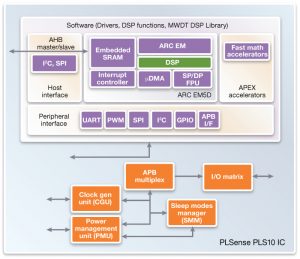 The PLS10 IC operates between 0.45V and 1.1V from a battery. An adaptive dynamic voltage control algorithm adjusts the operating voltage to achieve the required clock frequency.

PLSense’s designed its sub-threshold cell library to minimise the voltage variance between the “fast NMOS/slow PMOS” (FS) and “slow NMOS/fast PMOS” (SF) process corners (Figure 5). It was also able to improve the noise margins for these corners (Figure 6), compared to standard foundry libraries. 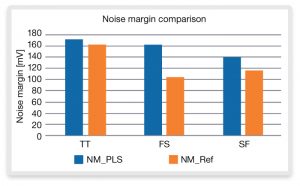 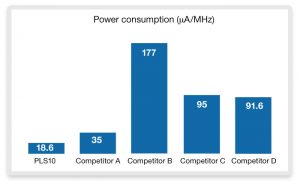 Operating with near-threshold or sub-threshold supply voltages can cut power consumption, at the cost of having to develop cell libraries and design methodologies that can overcome some of the technique’s limitations, such as susceptibility to noise and process variations. However, in markets such as IoT devices, where every Joule of energy saved means a few more minutes on the battery life, it may well be worthwhile.

Rich Collins is a product marketing manager at Synopsys.

By taking the circuit supply voltage close to that of the threshold voltage or even below, it is possible to optimize low-power VLSI design. But there are pitfalls.