Not surprisingly, companies are increasingly turning to multi-project wafers (MPWs, sometimes ‘shared wafers’) as an alternative to dedicated mask-sets. The technique aggregates multiple designs on a single wafer, so that the financial burden is shared across several different users.

Furthermore, where stringent cost control is required, there is the added bonus that MPW charges are calculated according to the area of the shared wafer that is used, rather than crudely by the raw number of designs on it. An MPW order can range in volume from just 40 die to several thousand — small enough to accommodate a tightly budgeted prototype or generate economically viable test silicon for new circuitry in an otherwise mature system-onchip; large enough to supply the volume needed for sampling or even an initial production run.

However, the trend to MPW is not solely dictated by cost, although that is the dominant factor. Several other important advantages should be noted:

One final point worth making here is that the MPW model is stable and mature. MOSIS has been in business since 1981. In that time, it has worked with commercial firms, government agencies, and research and educational institutions around the world to assist in the fabrication of more than 50,000 designs.

MPW does have its historical roots in academia, but it is testimony to how the model has been commercially hardened that over a third of our business today is with IDMs, and almost half is with companies that employ 500 staff or more. Even silicon’s big players are well aware of the numerous advantages offered by MPW.

Having considered how our approach can produce benefits in terms of budgets, support, networking and competitiveness, let’s now look at what makes up an MPW flow and how it provides access to manufacturing technology. Of necessity, some specifics here relate directly to MOSIS, but many broader elements are indicative of what a customer should expect across our branch of the semiconductor industry. 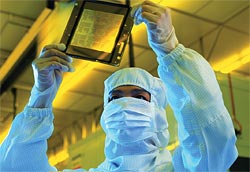 MPW companies partner with major foundries such as TSMC

The design company will first choose an appropriate process from among those available in the MPW marketplace and, if possible, determine which of the available pre-booked foundry runs he wishes to join (calendars are typically available a year in advance, albeit subject to change).

However, the services that the MPW supplier provides should begin before subsequent delivery of the design file. These can include access to design flows for digital, analog/mixed signal and full custom circuitry from leading EDA companies, a wide range of technology from IP vendors and, given the importance now assigned to design for manufacture, appropriate documentation and design guidance from the selected foundry. The broader implication of all these services is that the MPW company begins to smooth the vital process of getting the design file ready for delivery as soon as possible.

When the data is transferred, the supplier should perform a ‘project-check’ on the design. Typically, this will examine design syntax and layer names, compute the size of the project (the minimum bounding box), count the pads, and then confirm actual values against declared values. However, it is important that the client does not confuse the project-check with a full DRC.

Following completion of the project-check and/or a DRC step, the design is queued with other designs for that wafer and will then be sent to the foundry for the pre-booked fabrication run.

Throughout this process, customers should be able to track the progress of their project through a secure online website, and most MPW companies today provide further similar features such as live global 24/7 technical support (often with regional partners) and Internet-based user group forums, where customers can exchange useful tips and techniques.

In those cases where a client requires unpackaged parts, the resulting silicon marks the end of the MPW flow. However, packaging options — e.g., pad-to-pin assignments — as well as test options are typically available. These can be pre-specified by the customer and will be carried out either by the MPW supplier or other partners in the supplier’s extended network.

Figure 2. How mask costs have grown since 0.35um

This manufacturing flow is summarized in Figure 1. It is deliberately intended to be simple yet flexible, an absolute prerequisite given the inherently prototype-driven nature of the MPW concept. And that nature, in turn, points to another critical economic imperative that drives MPW, today more than ever.

It is generally accepted that the ability of semiconductor companies to innovate at cost, at speed and — dare one say it — at will has fueled the industry’s extraordinary historic growth. Now, a question is being raised as to whether NRE inflation (with mask-costs as an important bellwether) is reaching such a level that it threatens to seriously restrict the traditional course of innovation. We take some pride, as an MPW supplier, in giving the lie to this notion.

Because it offers access to a simple, flexible and cost-effective route to first silicon, MPW is becoming an increasingly important enabler of innovation. The financial restrictions upon a typical start-up company are a well-established fact of business life, but today even the largest players must necessarily constrain and control the budgets of each internal design team. MPW offers a constructive way of working within both such environments, indeed any environment where there is increasing tension between ideas and capital.

So, in conclusion, let’s just say that if this article convinces only one engineering manager that an ambitious-but-borderline design project now looks more viable because of the existence of MPW, it will have more than served its purpose.