Pruning back circuits can boost performance for some applications.

‘Inexact computing’ may sound like a contradiction in terms—or an all-too-frequent occurrence—but the technique is gathering increasing interest in the post-Moore’s Law era.

The technique is a response to increasing process variation coupled with demands for low-energy consumption. As opposed to an ‘exact’ computing model, an inexact approach exploits the fact that there are some applications where the engineer can trade off the accuracy of a circuit’s output against a need to comply with less than 100% with the specified result, and thereby greatly reduce energy needs.

A surprising number of end-uses fit this model, though they do vary in terms of their tolerance for inaccuracy. They can be found in areas such as embedded computing, multimedia and mobile communications. Specific instances include hearing aids and digital cameras.

To date, inexact designs have typically used voltage scaling. But the techniques involved can create their own overhead. Similarly, it might not always be possible to precisely tune the supply voltage as needed when the application is running.

At this year’s Design Automation and Test in Europe conference, a U.S.-Swiss-Singaporean team put forward an alternative approach that is essentially based on identifying and then cutting away those parts of a design that are not entirely necessary. The team calls its approach ‘Probabilistic pruning’.

“Our initial tests indicated that the pruned circuits will be at least two times faster, consume about half the energy and take up about half the space of the traditional circuits,” said Avinash Lingamneni, a Rice University graduate student who presented the research at DATE on behalf of his own school, Singapore’s Nanyang Technological University (NTU) and the Center for Electronics and Microtechnology (CSEM), a Swiss research institute.

The pruning is achieved by first identifying how much error an application can tolerate. To get some context as to what this means, Christian Enz, CSEM’s lead for the project, said, “We know that many perceptive types of tasks found in vision or hearing applications can easily tolerate error magnitudes of up to 10%.”

The next step is to estimate the probability that a circuit within a design will be active, prune away those with the lowest metrics, compute the resulting error in the circuit and check this against the target tolerance. A clearer idea of this process can be gained from the flowchart shown as Figure 1.

The Rice-NTU-CSEM group has then gone a step further by integrating their pruner into a logic synthesis EDA flow using tools supplied by leading vendors, including ModelSim. This is shown in Figure 2. 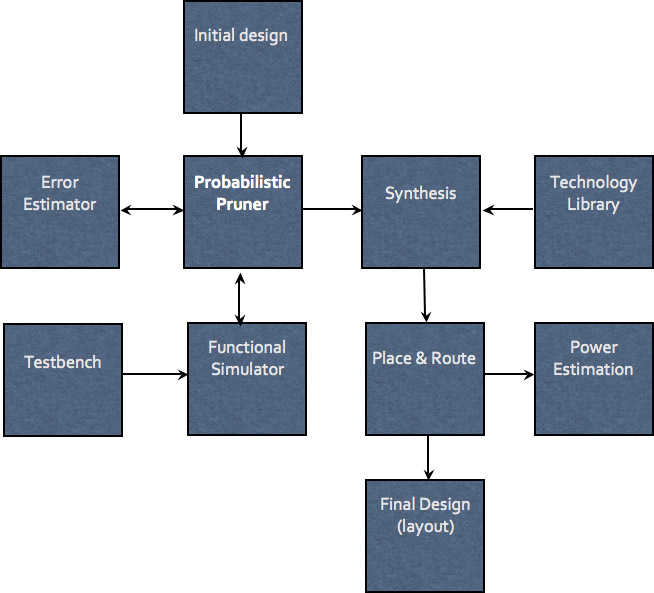 In achieving the gains cited above, the team offered five other takeaways from its work.

“We believe to have convincingly shown through extensive simulations that our technique achieves significantly better savings along all three [major] dimensions—energy, delay and area—while having comparable error, over the conventional scaling schemes,” said the group’s DATE presentation.

“Other benefits include the lack of dependence of the amount of error on any particular process technology and faster design time than conventional voltage scaling schemes as a result of easy integration into a logic synthesis-based CAD flow.”

The next step for the research is to develop a complete prototype chip for a specific application, most likely a hearing aid.

2 Responses to Inexact computing means knowing exactly what to cut

This year's Design Automation and Test in Europe conference heard from a broad range of users and suppliers about the challenges to and solutions for getting optimal yields at advanced process nodes, particularly as the industry advances toward 22nm. This article recaps presentations by four executives at the Dresden-hosted event: Pierre Garnier of Texas Instruments, Joe Sawicki of Mentor Graphics, C.J. Clark of Intellitech, and Naveed Sherwani of Open-Silicon. The presentations were all given during a session entitled "The Impact of Nanometer Technologies on Manufacturability and Yield."