Derek Bouius is a product marketing manager for Synopsys’ security IP, and brings to the role more than 15 years of experience in software development and product architecture. Prior to Synopsys, Bouius held engineering, product development, and marketing positions at Elliptic Technologies, DEW, and Memory Experts/Datalocker.

The cryptographic algorithms that protect today’s devices and communications infrastructure are only useful if their implementations have been validated by regulatory bodies, to ensure that they will work properly in the edge cases that emerge in complex interoperability scenarios.

The FIPS 140-2 specification covers 10 features of cryptographic modules that are designed and implemented as SoCs:

The FIPS 140-2 standard defines four security levels, to match the range of potential applications and environments for cryptographic modules. The lowest level of security is Level 1. The highest is Level 4, for use in situations where detection of, and response to, physical access is required. 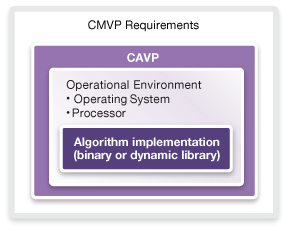 For CAVP to validate an algorithm, it must both have been designed as specified in the official algorithm document, and implemented in a way that allows for validation testing. If, for example, an algorithm is implemented within an application but there is no way to test that algorithm, then the algorithm cannot be validated.

The system designer must be very careful to create an interface that allows the algorithms to be tested so that the above requirements can be met without compromising security.

Vendors may use any of the NVLAP-accredited CST laboratories to test algorithm implementations. When vendors engage the lab, a large set of unique vectors is generated for testing. The vendor implements a test harness to create appropriate responses to the vectors and returns the results to the lab for verification. Once an algorithm implementation is successfully tested by a lab and validated by NIST/CSEC, it is added to an appropriate validation list that identifies the vendor, implementation, operational environment, validation date and algorithm details.

CSEC and NIST is reviewing FIPS 140-2 to keep up with current technologies, incorporate suggestions from federal departments and industry, and strengthen key requirements. The new version should improve physical and software security and module assurance. CMVP’s goal is to create an updated FIPS standard that will align with the International Organization of Standardization 19790 [ISO/IEC 19790:2012]. Other countries (e.g., Japan, Korea, Brazil) have similar programs to CMVP that may eventually consolidate into one international standard.

The Automated Cryptographic Validation (ACV) System is a project between NIST’s Information Technology Laboratory and commercial vendors to optimize the validation of cryptographic modules.

As described previously, making a minor change to the binary implementation or OE of a module means it can no longer be regarded as validated.

The current validation process does not allow automated testing to exercise all the complexity of today’s algorithm implementations. It is also difficult to test algorithms designed into hardware, and to obtain compliance assurance on platforms of actual use. This limits industry’s efforts to validate products and prevents it from fixing critical problems, such as common vulnerabilities and exposures, without breaking program rules.

The ACV system is meant to provide economic incentives to industry by reducing the time and cost of validations, and enabling validations through verifiable tests.

The working group has reached a key milestone with the demonstration of a test and validation implementation. Figure 3 shows the basic architecture of the components of the validation system and the interaction between the components.

Figure 3 Implementation of a validation system based on a client/server architecture (Source: Synopsys)

CAVP certification is important because it validates that your implementation of a security algorithm is functionally correct. A CAVP-certified solution should also speed up the process of getting a FIPS 140-2 level validation through CMVP, because a lot of the manual work involved is due to creating the test infrastructure for the target operating environment.

Derek Bouius is a product marketing manager for Synopsys’ security IP, and brings to the role more than 15 years of experience in software development and product architecture. Prior to Synopsys, Bouius held various engineering, product development, and marketing positions at Elliptic Technologies, DEW, and Memory Experts/Datalocker, among others. Bouius holds a BSc in Physics from the University of Waterloo.