When you were young, did you enjoy bouncing around on a trampoline? If so, try this for size. Imagine a membrane about 275 miles long, one mile deep and an average of 10 miles wide. These dimensions matter. Because this sheet of material covers the entire Grand Canyon—and before you go bouncing on it, bear one more thing in mind. The sheet is one-atom thick.

Welcome to the world of graphene, the carbon allotrope that in its purest form—where it looks like a 2D chicken wire composed of hexagons—might be the strongest material ever. That’s right, you could theoretically boing across the Canyon in perfect safety. Alternatively, on first hearing of graphene at its discovery a mere four years ago, an eminent chemist who shall remain nameless, declared: “What a wonderful material! Imagine what sort of condoms we can make out of it.”

This last anecdote is recounted by Professor Andre Geim of the Mesoscopic Physics Laboratory at the University of Manchester, England. If his name rings a bell, it should. Geim’s achievements include the ‘Flying Frog’, a famous (and to the Ig Noble Prize committee, infamous) experiment demonstrating magnetic levitation, as well as gecko-tape, an adhesive that mimics the way certain lizards climb walls when not selling car insurance. 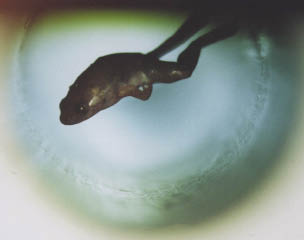 Geim now looks poised to enjoy long-term fame as the discoverer of graphene. The fact alone that it is a two-dimensional substance that can be isolated and fabricated has opened up major possibilities for fundamental physics research. But beyond that, some outside the academic community have espied great commercial potential.

Its strength aside, engineers may assign greater relevance to its electron mobility and possibilities as a sensor. Spintronics. Nano-electromechanical systems (NEMS). Advanced ICs. Even the long-term replacement of silicon at the heart of the microprocessor. Each of these applications has been put forward.

But, as we chat in his Manchester office, Geim is eager to play down almost all of them. “This kind of ‘Graphenium Inside’ thing that you hear about is unrealistic,” he says. “It is not going to happen in the next 20 years—you could even say that it is out there with CERN creating a black hole or the sun exploding.”

His core objection is that we have hardly begun to understand graphene. “You could even say that we know less today about graphene than we did two years ago. New research has changed our perception of the material and reversed some of our original thinking,” Geim says.

One such reverse directly addressed graphene’s potential use in electronics. “Among the first questions we asked about graphene was, ‘What limits its electronic quality?’ For a long time, it was assumed that there were charged impurities or defects on the surface. It was a simple answer and everybody was agreeing with it. There was a consensus,” recalls Geim.

Pure graphene is like a hexagonal 2D chicken wire.

“Yet it has just been shown that this simply is not correct. Other things are happening that have influence. And this is the kind of thing that is pushing us back to the beginning. The material looked very simple, but that is not proving to be the case.”

He underlines the scale of the task ahead by noting that there are probably just 20 or so institutions worldwide that are undertaking serious research using graphene. Contrast that with the hundreds that have ‘nanotechnology’ departments.

Andre Geim and his colleagues discovered graphene in 2004. The material had been talked about for years. In a rolled-up form it gives us carbon nanotubes and it is the bedrock of a traditional graphite pencil. The trick pulled off by the Manchester team was to isolate the material in a 2D monolayer form.

They did this using what is technically called micromechanical cleavage, but most researchers prefer—for reasons that will soon become apparent—to simply refer to it as the ‘Scotch Tape technique’.

First, a flake of graphite is placed on the tape. It is then folded over itself and pulled apart, repeatedly, so that the flake becomes thinner and thinner as it is worked on by the adhesive. Then, the plastic is attached to a silicon wafer and rubbed.

Researchers had tried to identify graphene using sophisticated microscopes, but Geim’s group found that their graphite residue interacted with the silicon oxide on the wafer’s surface, leading to a change of color according to the thickness of that part of the sample. A part that was around 100 layers thick would yield yellow, but a monolayer of constituent graphene would yield an almost invisible pink. These and other thickness-based color variations can be detected with a traditional light microscope.

Yet though a remarkably straightforward process is in place to produce graphene for laboratory research, that same production process also shows how far there is to go in terms of bringing graphene to the commercial world.

“The Scotch Tape technique will last forever for fundamental research. The flakes are very high quality, very good for study and very good for proof of concept work. It’s very cheap per atom,” says Geim. “But using the same technique for nanograms or picograms starts to take you into the thousands of dollars. On this basis, it is the most expensive material you can buy.”

“The other factor here is that there is still a lack of people working in the area and therefore an enormous amount of research that needs to be done,” he says.

Geim acknowledges that some applications are now apparent. He notes that we can already bulk produce graphene powder—though with too many impurities for use in electronics—and that this version could soon feature in bulletproof vests. “But,” he adds, “where they [applications] have emerged, it has largely been from speculation or by accident.”

This has not stopped major industrial players such as Intel, IBM and Samsung from moving into graphene research. “And I can see why,” says Geim. “We have a huge semiconductor industry that depends on keeping up with Moore’s Law—failing to meet those goals for ever improving performance would undercut an entire industry. It would be a disaster for the world economy.

“So, the companies with a great stake in that market will research everything that is relevant. And in time, graphene may be important here. But tomorrow? No chance.”

Geim does however think that approaches and research outside the semiconductor mainstream could lead to valuable but more specialized electronics applications in the nearer term.

“I think NEMS will happen. Some work from the Naval Research Laboratory looked at this in the context of membranes obtained through liquid phase exfoliation,” says Geim. “That appeared recently in Nano Letters and I think will prove to be significant.”

He also sees a place for graphene as a material for more application-specific electronic devices, particularly where its mobility puts it on a par with optoelectronic chips.

“You could also draw some comparison with gallium arsenide and its use today in very high-performance devices. The kind of thing here would be an individual, ultra high frequency device, something that was in the terahertz range. Compared to a Pentium, it is more of a niche application but with significant markets in mobile devices and satellite equipment. The cost issues here are also important—they are why you could see this being proposed within two or three years, rather than 20 years for a microprocessor. The economics are more attractive,” says Geim.

However, one discovery must take place to lay this path forward.

“I hope that very soon someone will demonstrate the basic circuit you need here, a ring oscillator, because that will draw it all together. Yes, there is a long way to go in our research, but the other important thing is that we have yet to learn anything which suggests that graphene-based electronics are impossible. The mobility is good enough, all the properties are good enough and there are no problems with the size. We really just need this demonstration.”

As part of our nanotechnology focus, we look at the prospects for graphene and carbon nanotubes in electronics. Paul Dempsey reports.

DAC 2021 is looming and here is our first round up of a major EDA player's plans for the physical event in San Francisco.