New open software platforms can dramatically advance the way consumers interact with the Internet via their televisions and an expanding array of TV-like mobile devices. Ultimately consumers will be able to access websites that are fully optimized for the TV platform. Today, this experience is primarily delivered via widgets—containerized web pages or information portals that are optimized for the TV experience. New open platforms such as Android, provide a new development platform as well as business models and revenue streams for OEMs and carriers. They also enable consumers to customize and enrich their user experience and download an increasingly broad array of applications.

Traditionally, there was a clear distinction between usage models in consumer electronic devices, where those devices were used, and how a user interacted with those devices. Mobile handsets were mainly communication devices used by one person to make phone calls and send text messages from anywhere. PCs were almost always used for business and web applications in an office environment and users interacted with them via a keyboard and mouse. Digital televisions (DTVs) and set-top boxes (STBs) were primarily used by several people to watch and listen to music and video in the living room.

Until now, these digital home devices were primarily closed systems with limited applications such as program guides, hard-disk personalized video recording and service messages. But the convergence of devices and constant demand for connectivity are leading to a paradigm shift in how users consume multimedia content. As more devices in the home are connected to each other and connected to the Internet, today’s consumer can experience any content at any time on virtually any device. 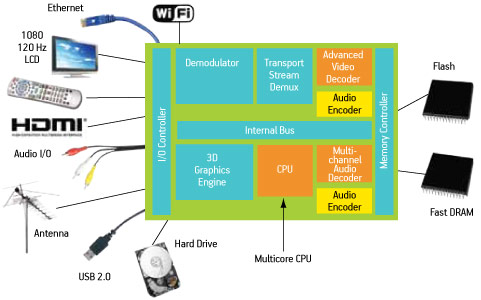 The new generation of connected, large screen HDTVs will finally enable the rich, connected experience consumers have been waiting for. DTVs are beginning to incorporate connected features and functionality, and are able to access content from a range of sources in their homes such as STBs, Blu-ray Disc players and home networks. The latest DTVs can seamlessly access content such as photos and videos from a PC on the local network. Through technology such as that developed through the Digital Network Living Alliance (DLNA), users can share content across connected devices.

DTVs can also increasingly access content online via streaming online services such as YouTube, Netflix, Vimeo, Vudu, Hulu and numerous other providers in the cloud. As still more content is made available in the cloud, consumers will prefer to access that via a television in the living room, instead of through the limited user interface of a computer. The cloud will continue to evolve, with future devices able to not only access content, but increasingly applications and interactive features. As such, the DTVs of tomorrow will become ‘command centers’ for all of a home’s electronic functionality—and as such, the way we interact with our DTVs will continue to evolve.

From a technical perspective, several key advancements have aligned to enable the next generation of connected DTVs. These include:

Challenges for the developer

According to research firm DisplaySearch, by 2012 over 45% of all DTVs will be Internet-enabled. All will require high performance to drive advanced features and functionality, as well as power efficiency and low system cost. This combination of requirements presents numerous challenges to product and SoC developers. These challenges are compounded by the increasingly fast evolution of DTV solutions, with product development taking place continuously. 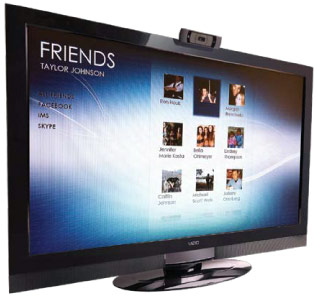 One of the most critical design considerations for tomorrow’s connected products is clever and thoughtful software design. Manufacturers have developed Internet-connected TV solutions in the past with little commercial success. These products were expensive and their features were limited. Part of the reason for this is that these products relied on proprietary software solutions, typically operating within a ‘walled garden’ where only select Internet content was made available. Since the software had specific target hardware, it was not easily ported to other platforms, limiting broad consumer use. With a limited development environment and limited hardware support, it was not possible to leverage the kind of broad development community that open software can provide.

Working under an open software platform has many significant advantages. Developers can utilize software components without paying high royalty or licensing fees. Experienced technical staff for open software, such as Linux software engineers, are widely available across all geographies, making software development fairly fast and cost-effective.

One drawback in developing consumer electronics and embedded devices with operating systems such as Linux though is that developers must painstakingly customize their software for devices to be production-ready. This process can take a significant amount of time and design effort to meet increasingly small windows of opportunity. Due to the fragmented natures of Linux and proprietary systems, applications tend to be device-specific, and in this environment, only the largest companies with substantial in-house software development teams can port applications across multiple devices.

Android was originally designed to provide rich applications and functionality for mobile handsets. Now, because of its well-defined software stack that allows easy application development and portability across embedded devices, Android is penetrating other consumer markets. This OS can bring an incredibly rich Internet experience to devices such as DTVs, STBs, Blu-ray players and more, with functionality and business models not previously possible.

Because of the Android development framework, software development time, especially testing, can be reduced significantly. Some of our partners have reported a 50% reduction in their software schedules attributable to Android. And perhaps best of all, Android is completely license and royalty free, so any company can afford to reap its benefits. With Android, companies no longer need to invest millions of dollars in feature and application development to compete with the world’s largest OEMs. Android makes it possible for smaller companies to provide competitive and differentiated solutions.

The promise of Android

Android has the potential to bring a vast array of applications to consumer electronics devices that were never before possible. In the mobile space, iTunes, the Windows Mobile Marketplace, OVI and now the Android Market show that availability of a wide range of applications for a large number of platforms leads to broader industry adoption. That success is driving an increasing number of consumer electronics companies to consider this model for device development.

Android removes the barriers created by the fragmentation of Linux development and creates a single framework on top of Linux to allow applications to be written once and run on a wide variety of devices. With Android, OEMs can deploy products with different hardware, feature, performance and price points, all from same software development effort.

As a virtual platform, Android protects the core parts of the rest of the OS so that each application is contained within its boundaries and cannot cross outside of those boundaries. If one application crashes, it will not shut down the other applications or the OS. This ensures the reliability needed for consumer electronics devices. The Android architecture truly allows openness, with the ability to download and run a broad range of third-party applications without security concerns.

Android provides a full, rich platform for application development that is easy to port, and easy to write applications for. Existing Android market applications can be leveraged on home entertainment devices, and as the market gains momentum, developers will create new applications specifically to enrich the digital living room experience. As a new business model, new applications may be provided to end users via an app store.

Bringing Android to the digital home

Since Android was originally targeted at mobile handsets, much of the functionality must be extended to handle the different feature sets and usage models of other embedded devices such as DTVs. To enable the connected DTVs of tomorrow, Android must be able to handle HD transport streams for digital broadcast and IPTV; integrate with existing middleware and offer client/server support for video-on-demand; provide conditional access and security for protected content access; conform with DLNA standards for network access and content sharing; and provide a viable living-room user interface for remote control support, large screen user interfaces (UIs) and menu systems.

Other necessary enhancements include true multitasking, hardware-accelerated HD video and multi-channel audio support, as well as support for 2D/3D accelerated graphics hardware. MIPS Technologies and our partners have extended Android to enable many of these capabilities, and we are continuing to enable further optimizations for a broad range of consumer electronics.

Android is here to stay. Community interest in leveraging Android for a wide range of consumer products is growing exponentially. Many companies are now working to standardize frameworks and define interactions with existing middleware stacks.

A large number of companies are joining in the effort to deliver optimized graphics, audio and video solutions, security solutions, UIs, development tools and other key technologies to ensure a rich Android experience in the digital living room.

The benefits are clear. With the momentum growing behind the large number of companies and developers behind bringing Android to a broad range of consumer electronic devices including tomorrow’s connected DTVs, we will see an explosion of Android-based devices for the digital living room over the next several years. Consumer demand for smooth delivery of rich Internet content will dictate the market’s evolution.

There are strategies, tools and devices to get the best from these OSs without buying a higher-end MPU, says Jacko Wilbrink.