Today’s SoCs must include ever more features and meet shorter tape-out schedules. Verifying their functional correctness is a growing challenge. Even with more than 70% of the overall design effort spent on verification, research suggests that few designs achieve first-time silicon success.

Design houses are therefore adopting various verification methodologies to reduce cycle time and enhance productivity. Most include the definition and capture of verification closure criteria with progress then measured using key verification coverage metrics. Assertion-based verification (ABV) is one of the most popular examples.

As ABV has been refined, it has been increasingly used in combination with emulation. This article reviews both techniques and their use together. We look at how Veloce assertion synthesis improves the emulation of SoCs that include assertions and helps reduce the time to verification closure. The Veloce compiler synthesizes logic for the assertions along with the design-under-test (DUT) and then maps them into an emulator, making emulation faster.

ABV uses assertions to capture a design’s functionality. Users then verify that a design correctly implements that functionality through the simulation, formal verification or emulation of those assertions. Assertions provide the following major benefits:

An ABV methodology establishes a unified flow to uncover IP issues at the IP, subsystem, and system levels. IP sources can be both external and internal. Assertions become an effective means of transferring knowledge between various teams. Assertions that are embedded inside the design improve the controllability and visibility of the RTL and make it easier to debug and isolate software or RTL bugs at the system level.

ABV then plays an important role in low-power verification. The increasing popularity of power formats such as UPF and CPF has resulted in more users realizing power intent schemes and RTL code independently and in parallel. Assertions are a useful means of debugging and isolating issues here such as missing isolation and retention cells, especially when the power scheme is still unproven and in development. Furthermore, assertion-derived coverage information provides a measure of how many power domains are truly being exercised during low-power verification.

Let’s look at the various levels of abstraction at which assertions can be specified, their use at those levels and then as a design progresses.

Assertions can be written during RTL development by design engineers. A good example would be assertions that check FIFO underflow and overflow (Figure 1). The main advantage of assertions here is that they allow design failures to be detected at source: there is then no need for error propagation to an external environment through design ports. IP-level assertions can be delivered and reused with the IP during block, subsystem and SoC level verification. These assertions help save time in debug by isolating verification and design issues even as a design environment becomes larger and more complex. 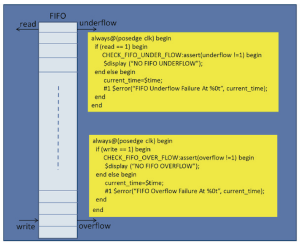 Assertions can be written at the IP or block-level interface. A good example here would be assertions that address communication between two blocks (Figure 2). These can work as checkers and monitors to ensure that the traffic and responses generated by the IP match the specification. They can be developed by engineers who understand the IP and IP interface specifications but who do not have internal development details. Assertions developed at the IP interface are easily migrated from IP to subsystem or SoC levels. Again this saves time isolating and debugging issues that can arise when IPs are integrated within complex SoC environments. 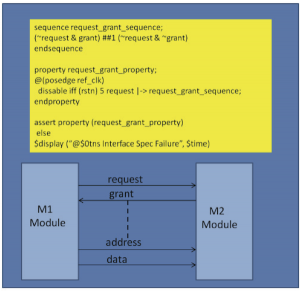 Assertions can be written by vendors and standards groups who have expertise in specific domains and then delivered to end-users in the form of libraries. For example, such libraries already exist for standard protocols such as AMBA, USB, SATA, and PCIe. Library development supports the reuse of assertions across various teams, groups, and organizations. It also helps reduce learning and development time. Such assertion libraries (sometimes called ‘protocol monitors’) are easy to use and help isolate issues for complex protocols.

Assertions can be written for system level scenarios. Here an example might user assertions to track specific protocol packet generation by an IP block upon a request from a processor. Such assertions are application-specific and are written to isolate bugs during system-level verification during the latter stages of a project. They are written by system architects who understand the specification and save a lot of effort when application scenarios are being debugged.

Emulators allow users to verify multi-million gate designs against real-world scenarios and find bugs that would be impractical to detect using much slower simulator technologies. Their speed advantage over simulators is also extremely useful where a design needs to undergo lengthy and detailed system-level tests.

Here are some important verification activities supported by emulation:

The market-leading emulator is Veloce from Mentor Graphics, and I will use it as an example to now describe the advantages of using ABV in combination with emulation. To do this, we first need to note some specific qualities of the Veloce emulator.

Apart from its capacity and practical value for debug, Veloce’s architecture gives users the flexibility to build testbench verification environments using hardware stimulus, software stimulus, or a combination of the two.

Because Veloce is standards compliant, it fosters interoperability with software simulators. It accurately models the user’s design into the emulator, irrespective of whether it is a single- or a multi-clock domain design.

The Veloce emulation family includes an integrated compiler that enables emulation’s seamless combination with ABV techniques at all levels: design IP, interfaces, protocols, and system. This integrated use-model (Figure 3) is closely aligned with the simulation use-model. Important features these models share include: 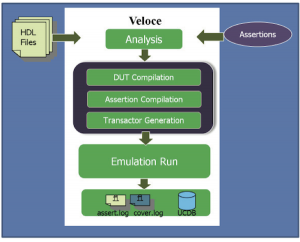 As noted, assertions can be embedded inside blocks. It is also good practice to write assertions in a separate program and then bind them to a specific module or module instance from a testbench. Figure 4 is an example of how an assertion block can be instantiated using a bind statement: 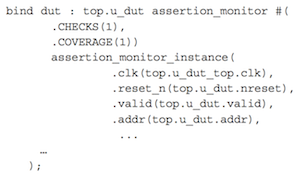 Once the assertions are inside the design, the user can begin assertion analysis or compilation. In the Veloce emulation environment, you can enable assertion compiles by using a compiler switch. This allows users to maintain one source for running emulation with or without assertions. Similarly users have access to options that allow for the finer control of assertions’ compilation and execution at various stages. Veloce provides useful statistics about assertion metrics after successful compilation of the full design and assertions.

After the successful compilation of a design with assertions, the design can be emulated in real-world, long-sequence scenarios. Veloce provides both onscreen messages and text reports with run-time assertion statistics for post processing. Many run-time options are available to handle and control the firing of assertion messages according to the user’s requirements. Finer user-level controls are available to enable and disable various assertions based on module, hierarchy, severity, and other criteria. These run-time controls can be handled directly using command options or various C-APIs provided with the tool. 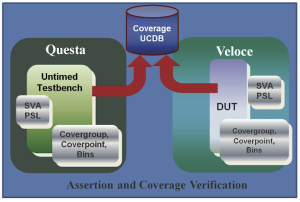 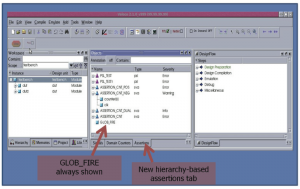 The Veloce waveform GUI allows users to perform any operation on an assertion signal that can be performed on a normal DUT signal. For example, engineers can drag-and-drop assertion signals into the waveform window. This makes debugging more like simulation and easier for verification and design engineers to achieve.

Amit Gupta is a manager at Mentor Graphics, Noida, India.

Verification coverage attempts to at least provide a partial answer to the question: "How do you know you are finished verifying?" It involves the combination of a number of techniques.